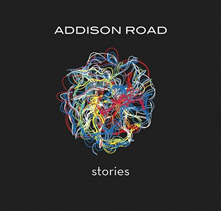 Addison Road’s new CD “stories” has hit the stores and will hit you where you live with its challenging and uplifting songs. The theme of “stories” is brokenness, second chances and redemption, and the message comes through loud and clear. Who but the most self-righteous among us couldn’t identify with Change in the Making’s lyric, “There’s a better version of me that I can’t quite see”?“Fight Another Day” is another powerful song for those times when you’re face down on life’s canvas, wondering if you’ll ever have the strength to get back up again. The song, which could be an anthem for all of us in these difficult times, pointedly asks, “Will you spend a lifetime running?” Anyone who has had their heart broken, their hopes dashed, their 401K disappear, and their faith in other people shattered would feel encouraged by this powerful song. Other songs on the new release are: “Won’t Let Me Go,” Need You Now,” “Show Me Life,” and a new twist on “This Little Light of Mine” that will take you back to those days of childlike faith.With Jenny Chisholm singing lead, and Ryan Simmons on guitar, vocals and piano, along with other band members Ryan Gregg (lead guitarist and vocals), Richard Scott (drums) and Travis Lawrence (bass, vocals, and harmonica), this new CD is the perfect antidote to the 2010 doldrums. No matter what’s going on in the world or your life, you can’t help but be encouraged listening to “stories”!