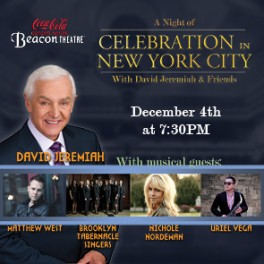 “There is no better place to celebrate the Christmas season than in spectacular New York City,” said Dr. Jeremiah. “From the brilliantly lit Christmas tree at Rockefeller Center, to the decorated windows of the department stores along 5th Avenue, to the Christmas show at Radio City Music Hall, Manhattan comes alive with the sights and sounds of the holidays. It is no wonder that we have chosen December for a very special Night of Celebration at the historic Beacon Theater in New York City. Our spectacular program will remind us that through the Word of God we can have a lasting and influential legacy. Together with my special friends, we will celebrate the unchanging Word of God!”

Dr. Jeremiah will speak and share a message during the event, and his special guests will join in fellowship through music.

“Whether young or old, rich or poor, far-famed or little known, we will elevate the Gospel of Christ and celebrate the Word of God,” said Dr. Jeremiah. “What we do with the Bible – and what the Bible does with us – is our legacy, as durable and undying as Him who proclaims: “The grass withers, the flower fades, but the word of our God will stand forever.”

For more information on A Night of Celebration in New York City with David Jeremiah and Friends and to purchase tickets, visit http://www.davidjeremiah.org/site/nyc/celebration.aspx.

About Turning Point Ministries:
Turning Point Ministries was founded in 1982 as the broadcast ministry of Dr. David Jeremiah to deliver the unchanging Word of God to an ever-changing world. Three decades later, with a multimedia network featuring radio, television, and online programming, magazines, and books, Turning Point reaches tens of millions of people around the globe with the saving knowledge of Jesus Christ. With the potential reach of 480 million listeners, Dr. Jeremiah’s radio messages air thousands of times each day, inspiring and equipping the body of Christ around the globe. And Momento Decisivo, the ministry’s Spanish-language outreach, is aired more than 800 times a day on nearly 600 radio stations in every Spanish-speaking country in Central and South America. With its largest audience to date, Turning Point Television reaches a potential 2.5 billion households worldwide.