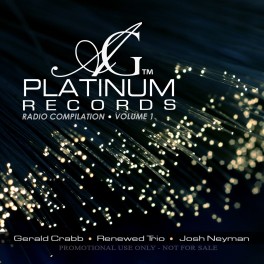 Ripley, Mississippi, September 8, 2014- The first radio compilation disc produced by A&G Entertainment, founded by Gerald Crabb and Alisa Asbury, has been sent to national radio. “I am thrilled to launch a new record label and promotions company,” Crabb stated. “Back in the early 2000’s, I helped launch a label, “Family Music Group” that garnered several #1’s, Dove Awards, and Grammy nominations. It is exciting to get back into producing new music and also assist new artists in developing their careers.”

Gerald Crabb is releasing his first single, “He Loved Till He Died,” from his latest album, BACK PORCH MISSISSIPPI. The song was written by Gerald Crabb and produced by the talented musician and producer, Brad Davis. The ballad features beautiful harmony from guest vocalists, Sonya Yeary Isaacs and Ben Isaacs and features Andy Leftwitch on the fiddle.

“Make It,” written and produced by Gerald Crabb is performed by Renewed Trio based out of Adairsville, Georgia. Renewed Trio consists of husband and wife, Brian and Dena’ Bagley and long-time member Ann King. “I have to say, the first time I heard this group, they literally brought me out of my seat,” Crabb remarked. Renewed has been singing together for eight years and keep a busy schedule. “Make It” is being received well in live audiences as Renewed make their way across the Southeastern states.

Also included on the Comp Disc is “Singing In The Pain,” performed by Josh Neyman. This song was written by Jonathan Nash, produced by Gerald Crabb and features harmony vocals of Reggie and Layde Love Smith. At the young age of 25, Neyman is exceptional! His vocal appeals to the youth, yet he is loved by people of all ages. Josh lives in Cleveland, Tennessee and has been traveling and singing Gospel music since he was 15 years old. Josh is also a songwriter and he owns his own graphic and production company.

About A&G Entertainment:
Combining many years of experience and success, Gerald Crabb and Alisa Asbury formed A&G Entertainment in 2013. A&G Entertainment is committed to discovering new talent and providing quality recording packages and services that will boost artists to the next level, regardless of where they may be on the musical path.