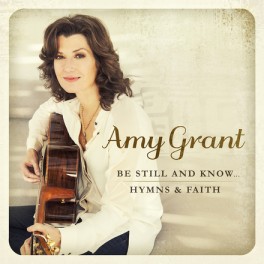 Nashville, Tenn. (March 3, 2015) — Six-time GRAMMY® Award winner Amy Grant teamed up with her country superstar husband, Vince Gill, for the release of Be Still And Know…Hymns & Faith, set to debut April 14. The album features several tracks from previously released projects Legacy…Hymns & Faith and Rock of Ages…Hymns & Faith, which have sold more than 800,000 copies combined. The April release will include two newly-recorded songs produced by Gill: “Power In The Blood” and “Be Still And Know.”

“Hymns were so much a part of my childhood,” Grant said. “We sang hymns like people sing the national anthem before a ballgame; it was hymns before everything. We sang hymns in our homes, in our church three times a week – there would be some Sunday nights where all we did was sing hymns. These songs are for people who grew up with the hymn tradition – to remind them how inspiring they are.”

Grant’s longtime friend, GRAMMY® Award winner Michael W. Smith will join her this May for various shows featuring songs from the album. Additional information will soon be announced here.

Be Still And Know…Hymns & Faith follows Grant’s 2014 fall release of In Motion: The Remixes, which soared into the Top 5 on Billboard’s Electronic Albums Chart. Grant’s 2013 critically-aclaimed studio album How Mercy Looks From Here featured James Taylor, Carole King, Sheryl Crow, Eric Paslay, Will Hoge and Vince Gill and debuted at No. 12 on the Billboard 200 Chart. The album also topped the Billboard Christian chart, making it a record-setting 16th No. 1 album for Grant in the Christian genre.

Later this year, Grant will host “A Nashville Weekend,” welcoming fans to her hometown for a three-day event featuring concerts and special events. The September weekend will offer fans an unforgettable Nashville experience all while benefiting Grant’s Helping Hands Foundation. For more information, or to book your ticket, click here.

About Amy Grant
Amy Grant’s career spans more than 30 years and stretches from her roots in gospel into becoming an iconic pop star, songwriter, television personality and philanthropist. With three multi-platinum albums, six platinum albums and four gold albums, her total career album sales have exceeded 30 million. Grant’s chart success has been consistent throughout her career with six No. 1 hits, ten Top 40 pop singles, seventeen Top 40 Adult Contemporary tracks and multiple Contemporary Christian chart-toppers. In addition to her six GRAMMY® Awards, Grant has earned 26 Dove Awards (including four Artist of the Year Awards) and has been awarded a star on the Hollywood Walk of Fame. Conventional wisdom has it that Grant put Contemporary Christian Music on the map becoming the first Contemporary Christian artist to have a platinum record, the first to hit No. 1 on the Pop charts, and the first to perform at the GRAMMY® Awards. With that, her legacy as one of the most influential artists of the past couple of decades is assured. Her first studio album in more than a decade, How Mercy Looks From Here, released May 14, 2013 and debuted at No. 12 on the Billboard 200 Chart. Be Still And Know…Hymns & Faith is set to release April 14.