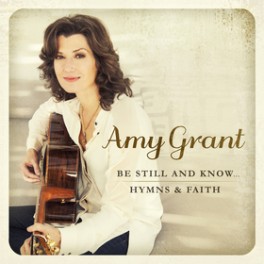 Nashville, Tenn. (April 14, 2015) — Be Still and Know… Hymns & Faith, the latest from multi-platinum selling artist Amy Grant is available today with media praise and a tour on the horizon. Grant recently sat down with ABC Radio, CMT Radio, GAC and Kathie Lee and Company to share about her latest project – a 15 song collection, including two newly-recorded songs produced by husband, Vince Gill: “Power In The Blood” and “Be Still And Know.” The six-time GRAMMY ® winner can also be seen on the pages of Country Weekly, Simple Grace and Homecoming in support of Be Still and Know… Hymns & Faith.

Media has applauded Grant’s unique take on traditional favorites found on Be Still and Know… Hymns & Faith.
“Grant and husband Vince Gill collaborate on a collection of treasures that will be sure to make your favorite hymns favorites all over again—with fresh renditions on timeless titles plus two new original tunes! One-word quote – Timeless! Four out of Five Stars” CCM Magazine
“Speaking of crossing bridges from one world to another, Grant is the best at such cultural exegesis. And this album is a testament of her prowess; once again on this disc, Grant shows how she can engage the modern world with the old sonic treasuries of the church with glowing results.” Hallels

“Amy Grant has done what she’s done all along and created an album that will suck you in, get you involved and move you beyond your expectations.” The Front Row Report
“Grant convincingly sings each and every word… she also truly cherishes these songs.” AXS
“One of our first modern-day hymn writers, Amy Grant helped start the worship music craze… ‘Power in the Blood’ and ‘Be Still and Know’ are childhood favorites of Grant’s, and her covers are produced by her talented hubby, Vince Gill. They blend perfectly with the album’s other tracks.” Rhapsody

“Be Still and Know… Hymns & Faith is a fresh take on the timeless hymns of the church. Modern arrangements, new choruses, and sometimes-complete re-imaginations help these deep and meaningful songs shine.” New Release Tuesday

“Well done Amy for creating an album that reminds us why she is one of the best female singer/songwriters currently.” 365 Days of Inspiring Media
Grant will embark on the “A Celebration of Songs & Hymns” tour with fellow acclaimed singer/songwriter Michael W. Smith next month. In addition to a recent performance at the White House Easter Prayer Breakfast, Amy will soon attend the New York City premiere of “Something Rotten!” – the new musical written and produced by long-time friend and fellow GRAMMY ® Winner Wayne Kirkpatrick. The show will officially open on Broadway on April 22.
Grant’s previous hymns albums (Legacy… Hymns & Faith and Rock of Ages… Hymns & Faith) have resonated with audiences, selling more than 800,000 copies combined. This third collection features such timeless hymns as “Rock of Ages,” “‘Tis So Sweet to Trust in Jesus,” “Softly and Tenderly” and “Holy, Holy, Holy.” The project also includes “Deep as It is Wide,” a modern gem from Grant’s critically acclaimed How Mercy Looks From Here, written by country newcomer Eric Paslay that features Paslay and Sheryl Crow joining Grant on vocals.

About Amy Grant:
Amy Grant’s career spans more than 30 years and stretches from her roots in gospel into becoming an iconic pop star, songwriter, television personality and philanthropist. With three multi-platinum albums, six platinum albums and four gold albums, her total career album sales have exceeded 30 million. Grant’s chart success has been consistent throughout her career with six No. 1 hits, ten Top 40 pop singles, seventeen Top 40 Adult Contemporary tracks and multiple Contemporary Christian chart-toppers. In addition to her six GRAMMY® Awards, Grant has earned 26 Dove Awards (including four Artist of the Year Awards) and has been awarded a star on the Hollywood Walk of Fame. Conventional wisdom has it that Grant put Contemporary Christian Music on the map becoming the first Contemporary Christian artist to have a platinum record, the first to hit No. 1 on the Pop charts, and the first to perform at the GRAMMY® Awards. With that, her legacy as one of the most influential artists of the past couple of decades is assured. Her first studio album in more than a decade, How Mercy Looks From Here, released May 14, 2013 and debuted at No. 12 on the Billboard 200 Chart.
[Get Connected with Amy Grant]
Website // www.amygrant.com
Facebook // www.facebook.com/amygrant
Twitter // www.twitter.com/amygrant