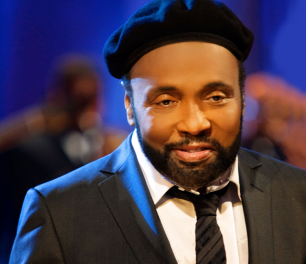 Andraé was known as “the father of the modern gospel.” For more than 50 years he lived up to his title, bridging a variety of genres of music. He was a true pioneer in his field and changed the course of Christian contemporary music forever.

When Andraé was a young child, his father asked the Lord to instill in his son the gift of music. God heard his prayer and gifted Andraé with not only tremendous piano skills, but vocal and songwriting abilities beyond his years. Andraé, and his twin sister Sandra, became a huge part of the music program at their parents’ church in Pacoima, California. As they poured out their musical gifts in the services, God poured more music into them.

After Andraé entered high school, he formed his first group—the Church of God in Christ Singers. They were the first to record one of his most recognizable gospel hits—The Blood Will Never Lose Its Power. In 1965, he formed Andraé Crouch and the Disciples. The group united races with their broad appeal to both black and white audiences. They appeared on The Tonight Show and performed at Carnegie Hall and the Hollywood Bowl. The group toured in more than 60 countries. Giants in the industry credit Andraé for transforming contemporary Christian music with his unique style and intricate harmonies. His timeless classics including: Through It All, I’ve Got Confidence, Soon and Very Soon, My Tribute, Take Me Back, Bless His Holy Name, Tell Them, If Heaven Never Was Promised to Me, The Blood Will Never Lose Its Power, Jesus Is the Answer, and I Don’t Know Why Jesus Loved Me have been sung in churches across the world.

As his notoriety grew, secular musicians took notice and invited him to help them with their projects. His influence extended far beyond the church walls. He worked as a producer and arranger for several artists including, Michael Jackson, Madonna, Quincy Jones, Diana Ross, and Elton John. His talent also infiltrated the film industry and he was able to add film credits to his impressive résumé for his work in Once upon a Forest, The Color Purple, The Lion King, and Free Willy.

His work over the years garnered nine Grammy Awards, six Dove Awards, an Oscar nomination, a star on the Hollywood Walk of Fame, numerous other prestigious honors, and in 1998, he was inducted into the Gospel Music Association’s Gospel Music Hall of Fame.

Andraé was proud of the ministry that he and his sister were involved in. They served as pastors of the New Christ Memorial Church in San Fernando, California, the church that was founded by their parents.

Andraé’s greatest desire was to leave a lasting legacy of hope for children. He certainly accomplished that, by inspiring the world with his testimony and unforgettable music. He might “have gone to see his King” and left us for a little while, but his songs will live on, and continue to be sung and bless generations to come.