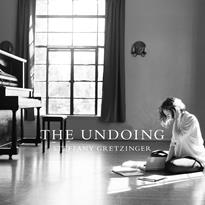 Bethel Music, the worship ministry of Redding, CA-based Bethel Church, releases the debut solo album from artist Steffany Gretzinger, The Undoing, on August 26th through Provident Distribution. The Undoing is an intimate collection of original songs that began in what Steffany describes as “the moments in-between” – the life we live in between our corporate worship gatherings.

The concept of “The Undoing” emerged during a distinct season of transition and change in Steffany’s life – her first year of marriage while living in a new country, amongst new family, friends and surroundings. “I realized that this life was all about process, God’s pleasure over my life was in the process, in the journey,” she shares. Steffany found herself searching out honest ways to engage with God in daily life, learning to be more “undone” before Him.

This search has yielded an album containing 11 lyrically rich tracks bearing fresh melodies and unique instrumentation. What does it look like to worship in processes of growth, love, pain, transition? The Undoing is a whole-hearted response to this question and the journey it beckons. “Some songs began in spontaneous worship, others started as personal prayers or were written for friends. These songs are the in-between Sunday’s stuff, when no one else is watching… learning to worship and sing truth over yourself until you believe it, not just because you do,” says Steffany.

The album’s anthemic track about trust, “Steady Heart,” is laced with atmospheric vocals and sonic intricacies. With honest lyrics and provoking textures, “Promise I Always Will” explores the unfolding of covenant relationship. Hymn-like in quality, “Out of Hiding” is a pointed ballad sung from God’s perspective over his beloved. The album’s conclusion, “Getting There,” is a descriptive anthem exhorting listeners to stay the course with faith and confidence.

A unique parallel to the project was the news that Steffany was pregnant with their first child, whose due date coincides with the album release by several days. The Undoing invites listeners to embrace not so much the destinations we reach with God, but the crucial moments along the way. It is from this place that Steffany has translated her experiences and passion into songs that are meant to last.

4) I Spoke Up – written by Steffany Gretzinger

7) Promise I Always Will – written by Steffany Gretzinger & Amanda Cook

9) No Fear In Love – written by Steffany Gretzinger & Nate Ward

10) Open Up Let the Light In – written by Steffany Gretzinger

11) Getting There – written by Steffany Gretzinger, Amanda Cook, & Maggie Ritchie

The Undoing follows the release of You Make Me Brave last April, which launched in its debut week at retail to No. 10 on the Billboard Top 200 chart, becoming the highest charting retail debut ever for Bethel Music (Tides Hit No. 30 Sept. 2013) and sold nearly 14,000 copies. You Make Me Brave also hit No. 1 on the overall Top Christian/Gospel Albums Billboard retail chart, while breaking into the Top 5 during the week on iTunes® in the US, Canada and Australia, and hitting the Top 25 in the UK and Top 100 in Germany. In February 2014, Bethel Music’s Tides Live, shot to No. 1 on iTunes’ Christian/Gospel chart, and Bethel’s first-ever studio album, Tides (Sept. 2013), hit No. 1 on the overall Top Christian/Gospel Albums and Praise & Worship Billboard retail charts amidst unprecedented international acclaim.

About Bethel Music:
Bethel Music is a worship ministry that formed as an organic extension of Bethel Church in Redding, CA. Over the last four years, Bethel Music has grown from being a local church music ministry to becoming a global outreach featuring a cadre of songwriters and worship leaders, over half a dozen albums, chart-topping songs, and both online and on-campus worship schools. The heart of Bethel Music is to be a steward of the worship being created and released at Bethel Church, making it a resource available to the world. In addition to thousands of people that attend Bethel’s weekly worship services, another 150,000 plus people subscribe to the online stream of the services at www.ibethel.tv. More about Bethel Music can be found at www.bethelmusic.com, www.facebook.com/bethelmusic and www.twitter.com/bethelmusic.