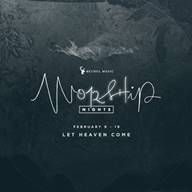 Bethel Music, the worship music and community of songwriters emerging from Bethel Church in Redding, CA, announces a nine-city, four-state “Worship Nights” tour to begin Feb. 9 in Charlotte, NC. The tour will feature Bethel Music worship favorites and new music from We Will Not Be Shaken, which releases this week amidst 5-star acclaim and has already perched at the top of the Christian & Gospel iTunes chart while hitting No. 2 and No. 10 on the overall iTunes Top Albums chart with the Deluxe Edition and digital album respectively.

In addition to the evening event, a limited number of tickets are available in each city for a special Bethel Breakout session. The Bethel Breakout includes a free single from We Will Not Be Shaken via digital download, an exclusive afternoon question and answer session with Bethel Music artists and team members followed by an intimate acoustic worship session and a two-hour workshop with Bethel Music pastors and ministry team.

“As a group of passionate believers pursuing His presence, our artists and writers seek to capture what we feel God is saying through songs that declare who He is and who we are in Him,” says Joel Taylor, Director of Bethel Music. “Our heart for Worship Nights is to partner with what God is doing in communities around the world and see heaven invade earth. Join us for an authentic night of worship, encouragement and prayer as we love God together and pursue His presence.”

For more information on the “Worship Nights,” Bethel Breakout sessions and the worship artists that are featured in each city, go to http://www.bethelmusic.com/worshipnights.

Setting the stage for what worshippers can anticipate at the “Worship Nights,” Bethel Music’s We Will Not Be Shaken was recorded during an evening of worship on a mountaintop overlooking Shasta Lake north of Redding. Chronicling the sound and awe-inspiring visuals from a multi-camera shoot that includes aerial views from a drone aircraft’s camera flying overhead at this unique gathering, the recording is meant to be a catalyst for other worship communities to take hold of what it means to “not be shaken.” The live album and DVD present 11 new songs led by the Bethel Music Artist Collective, including many of the artists on the tour and listed above, as well as Jenn Johnson, Matt Stinton and debut artists Hannah McClure, Jonathan David Helser and Melissa Helser.

Prior to the release of the highly anticipated project, We Will Not Be Shaken music was featured as an exclusive ‘First Play’ on iTunes Radio and streamed on RELEVANT’s “The Drop” while the film (DVD) premiered on Bethel Music’s Facebook page for free to over 25,000 Facebook fans from around the world. The music video, “Ever Be,” from the DVD went to the No. 1 position on the iTunes Top Music Videos all genre chart and continues to be a bestseller.

Musicians are encouraged to download the chord charts for the new album (and past recordings) from bethelmusic.com, where videos, events and more resources can also be found, along with links to Bethel Music social media sites: www.facebook.com/bethelmusic, @bethelmusic and http://instagram.com/bethelmusic.

About Bethel Music:
Bethel Music is a worship ministry that formed as an organic extension of Bethel Church in Redding, CA. Over the last four years, Bethel Music has grown from being a local church music ministry to becoming a global outreach featuring a cadre of songwriters and worship leaders, over half a dozen albums, chart-topping songs, and both online and on-campus worship schools. The heart of Bethel Music is to be a steward of the worship being created and released at Bethel Church, making it a resource available to the world. In addition to thousands of people that attend Bethel’s weekly worship services, another 150,000 plus people subscribe to the online stream of the services at www.ibethel.tv. More about Bethel Music can be found at www.bethelmusic.com.