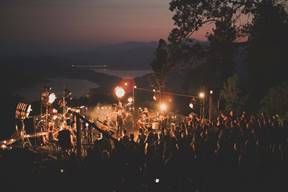 Bethel Music, the worship music and community of songwriters emerging from Bethel Church in Redding, CA, released the highly anticipated We Will Not Be Shaken CD/DVD internationally last week amidst 5-star acclaim. In its debut week at retail, the album became the No. 9 bestseller on the Billboard Top Albums chart, becoming the highest charting retail debut ever for Bethel Music (You Make Me Brave Hit No. 10 April 2014). We Will Not Be Shaken also more than doubles Bethel Music’s previous best-selling debut, selling nearly 30,000 copies plus an additional 24,797 singles. The recording also hit No. 1 on the Christian, Year To Date Christian and Praise and Worship Billboard retail charts, while breaking into the overall Top 5 during the week on iTunes® in the US (No. 2), Canada (No. 1) and Australia (No. 5), and hitting the Top 10 in Brazil and New Zealand, Top 20 in the UK, No. 56 in Germany, No. 61 in Spain and No. 62 in France. The album was further No. 1 in the UK on the Official Christian & Gospel Albums Chart (as reported by Official Chart Company).

Taking the new music and its best-loved worship anthems on tour, Bethel Music will travel to nine cities and four states on its “Worship Nights” tour beginning Feb. 9 in Charlotte, NC. In each city, there will be a full band and production team along with a combination of several Bethel Music worship artists leading the songs, including artists such as Brian Johnson, Jeremy Riddle, Steffany Gretzinger, Amanda Cook, Hunter Thompson, Paul McClure, Kalley Heiligenthal and Josh Baldwin. For all the latest tour information and tickets, go to http://www.bethelmusic.com/worshipnights.

Setting the stage for what worshippers can anticipate at the “Worship Nights,” Bethel Music’s We Will Not Be Shaken was recorded during an evening of worship on a mountaintop overlooking Shasta Lake north of Redding. Chronicling the sound and awe-inspiring visuals from a multi-camera shoot that includes aerial views from a drone aircraft’s camera flying overhead at this unique gathering, the recording is meant to be a catalyst for other worship communities to take hold of what it means to “not be shaken.” The live album and DVD present 11 new songs led by the Bethel Music Artist Collective, including many of the artists on the tour and listed above, as well as Jenn Johnson, Matt Stinton and debut artists Hannah McClure, Jonathan David Helser and Melissa Helser.

In addition to the sales success, We Will Not Be Shaken has already received hundreds of 5-star iTunes fan reviews as the critics similarly rave. CCM Magazine says that “This is an album that simply soars above the rest” while NewReleaseTuesday.com continues, saying the new album features “anointed lyrics that are both emotionally stirring and grounded in truth alongside musical atmospheres that quiet the soul while simultaneously clearing space for God to speak.” JesusFreakHideout.com says that “the whole album has a magnificently peaceful ambiance that is layered with elegant instrumentation” while Hallels.com says that the album has “songs that are going to make the repertoire of many worship teams in months and years to come.” ChurchMag agrees that worship music “doesn’t get better than this” as The Church Collective calls the album “pivotal” and says “tasteful synth, calming strings, deep lyrical content, catchy melodies and power anthems are the banners of this new record…pick up your copy and enjoy.”

Prior to the release of the highly anticipated project, We Will Not Be Shaken music was featured as an exclusive ‘First Play’ on iTunes Radio and streamed on RELEVANT’s “The Drop” while the film (DVD) premiered on Bethel Music’s Facebook page for free to over 25,000 Facebook fans from around the world. The music video, “Ever Be,” from the DVD went to the No. 1 position on the iTunes Top Music Videos all genre chart and continues to be a bestseller.

Musicians are encouraged to download the chord charts for the new album (and past recordings) from bethelmusic.com, where videos, events and more resources can also be found, along with links to Bethel Music social media sites: www.facebook.com/bethelmusic, @bethelmusic and http://instagram.com/bethelmusic.

About Bethel Music:
Bethel Music is a worship ministry that formed as an organic extension of Bethel Church in Redding, CA. Over the last four years, Bethel Music has grown from being a local church music ministry to becoming a global outreach featuring a cadre of songwriters and worship leaders, over half a dozen albums, chart-topping songs, and both online and on-campus worship schools. The heart of Bethel Music is to be a steward of the worship being created and released at Bethel Church, making it a resource available to the world. In addition to thousands of people that attend Bethel’s weekly worship services, another 150,000 plus people subscribe to the online stream of the services at www.ibethel.tv. More about Bethel Music can be found at www.bethelmusic.com.