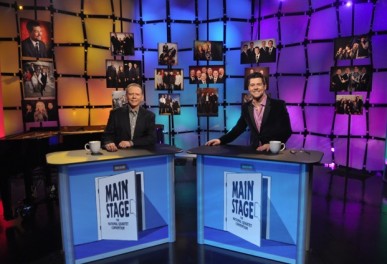 Nashville, TN – Gerald Wolfe and Jason Crabb are your hosts as they take you on a musical journey to the Main Stage at the National Quartet Convention on this brand new season premiering tonight on TBN!

From the stage to the studio, the show highlights the best of the best from the NQC stage. You don’t want to miss inspirational performances from your favorites such as The Hoppers, Greater Vision, the Booth Brothers, Kingdom Heirs, Ernie Haase & Signature Sound, Jeff & Sheri Easter, The Bowling Family, Karen Peck & New River, and many others – of course you’ll hear a few from Jason and Gerald as well.

Clarke Beasley states: “Bringing the excitement of the NQC to the home viewing audience through this show is a wonderful way to share the gospel of Christ. We are excited to partner with our friends at TBN to present this show.

The 2014 National Quartet Convention will take place in Pigeon Forge, TN from September 21-27, 2014 at the LeConte Center. Approximately 40,000 people attend the event annually with at least 40 states and a half dozen foreign countries represented. Complete event infortmation is available online at www.nqconline.com.

With 26 networks and growing worldwide, the Trinity Broadcasting Family of Networks is the world’s largest faith-and-family television group, airing a broad range of church and ministry programming, Christian music, family friendly movies, children’s programming, and shows for teens and young adults 24 hours a day to every inhabited continent via 87 satellites and 20,000 television and cable affiliates. In addition, TBN’s most popular global networks are available on computers, smart phones, and other mobile devices, and over 22,000 hours of entertaining and inspiring On-Demand programming is accessible via TBN’s innovative online network, www.iTBN.org. To find out more about the Trinity Broadcasting Family of Networks, log on to www.tbn.org.