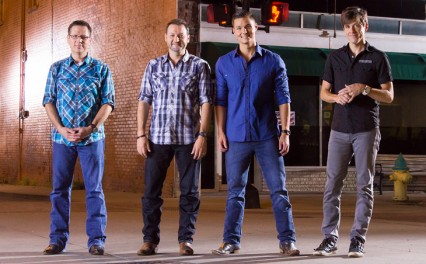 (Hendersonville, TN – July 28, 2014) After the success of their first concept video, Brian Free and Assurance has recently been back behind the camera again, diligently working on the release of the group’s second such effort for the increasingly-popular song “Say Amen.”

“Say Amen” was penned by Kenna West, Jason Cox and Michael Farren, and it’s the first release on the group’s latest project, “Unashamed.” The song has rapidly risen to the No. 2 position on the Singing News Magazine Top 80 Chart in just its fourth month since the song’s release. It debuted at No. 32 before rising to the ninth position in its second month and then elevating to the No. 3 spot for August.

The male quartet previously comprised an award-winning concept video for the 2012 song, “I Want To Be That Man,” which was co-written by Ricky Free and Lee Black.

“Brian Free and Assurance keeps delivering amazing songs on every project,” Daywind Records vice president and A & R director Scott Godsey – who served as the producer and director of the video – explains. “We are thankful for the opportunity to work with these guys on the ‘Say Amen’ video production. Our hope is that this video will go beyond our normal borders and branch out to new media sources. This is without a doubt one of the best songs that I’ve heard in Southern Gospel Music.”

Brian Free and Assurance is a Daywind Records recording artist, and Daywind held a contest in April that encouraged fans to send in their testimonies, telling what God had done for them to make them “Say Amen.” The winner of the contest was Jim Hutson – a Columbus, Ind., resident – who has part of his story unfold in the video.

Filming for the video took place in the Gallatin and Hendersonville areas, which are suburbs of Nashville, Tenn.

“We had an amazing time recording the new video,” points out Brian Free, the group’s manager and tenor singer. When you watch the video or hear this song, just think about all of the things God has done in your life.”

Daywind Records is home to an award-winning roster of artists, including Greater Vision, Karen Peck and New River, Legacy Five and the Nelons. Daywind is distributed to retail through New Day Christian Distributors, Select-O-Hits, and all major digital outlets, including iTunes. For more information, visit daywindrecords.com or contact Amanda Martin at publicity@daywind.com.

For more information on Brian Free and Assurance, visit brianfreeandassurance.com