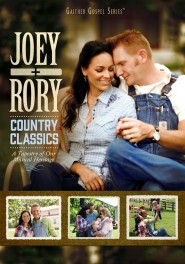 NASHVILLE, Tenn.—October 28th, 2014—Academy of Country Music (ACM) Award-winning husband and wife country duo Joey+Rory have just released an all-new recording in partnership with Gaither Music Group. Inspired by songs from their childhoods and music that helped make them kindred spirits, the couple has created Country Classics, A Tapestry of Our Musical Heritage (Gaither Music Group/Farm House Recordings), a collection of tunes that create a songbook of traditional American country music.

Available on both CD and DVD, the recording weaves more than a fabric of lyrics and chords. “As a songwriter, these are all songs I wish I had written—songs that we are honored to not only sing, but to have the chance to try to ‘make our own,’” describes Rory, known for hits he has written or co-written for Kenny Chesney, Blake Shelton, Randy Travis, Clay Walker and Collin Raye among others.

“I dedicated this record to my father, Robert Feek, who passed away in 1988…before I ever made my way to Nashville or heard one of my songs on the radio or played the Grand Ole Opry with my beautiful wife…he would’ve loved where his dream has led me. And I believe he would’ve loved this record.”

The record, produced by Rory, features songs such as “King of the Road,” “Don’t It Make My Brown Eyes Blue,” “Paper Roses,” “I Believe in You” and others including “Coat of Many Colors,” one of the first songs Joey learned as a little girl.

“When I was about four years, old my mom and dad gave me a Dolly Parton cassette tape; and I took it upstairs and played it over and over again until I learned all of the words to ‘Coat of Many Colors,’ even though I didn’t know how to read yet,” she recalls. “I’m so proud to finally get to record [this song] and many other songs that Rory and I loved and listened to when we were young….”

The two sweethearts shared stories behind these songs with gospel music legend, singer, songwriter and friend Bill Gaither on the Country Classics DVD. Taped outdoors on a sunny day at the Feek Farm south of Nashville, TN, the three talked about the couple’s successful music career, their rich heritage of country music, details of what life is like on the farm and about Joey+Rory’s year of both mountaintops and valleys.

In addition to recording the new CD and video, Joey+Rory gave birth to their baby girl, Indiana, who was diagnosed with Down’s syndrome. A couple of months later, just as they were growing accustomed to the joys of parenthood, Joey was diagnosed with cervical cancer, yet underwent a successful surgery to remove it. A few months later, Rory’s mother passed away.

“As God often reveals, what seemed like our biggest fears are [in the end] our greatest joys,” commented Rory as he detailed how the tough days have actually made their lives more fulfilling over time—a fitting discovery for the couple whose signature song is “That’s Important to Me.”

Joey+Rory remind us of what’s important to them along life’s journey as they share their story and the songs on the new recording. The release will be featured on tv networks including RFD, PBS, DISH TV, DIRECTV, TBN, Family Net, TNN, Airtime, CTN, The Walk TV (formerly Legacy), TCT and TLN and also in Canada on Vision TV, CTS, Grace TV and the Miracle Channel. In addition, the DVD will be featured on Gaither TV (available on Roku, Google and the Internet).

The couple’s hit tv series, “The Joey+Rory Show,” filmed entirely on and around their farm, is one of the highest rated shows on the RFD-TV cable channel.

Country Classics, A Tapestry of Our Musical Heritage, is exclusively distributed by Capitol Christian Distribution and is available throughout general market stores and the Christian marketplace in addition to online retailers including iTunes, Amazon and www.gaither.com. The audio recording is available at Cracker Barrel Old Country Store®.
For further information regarding Joey+Rory, visit www.joeyandrory.com, follow them at www.facebook.com/joeyandrory or on Twitter at @joeyandrory.

About Joey+Rory
Joey+Rory, a country music duo featuring husband-and-wife vocalists Rory Feek and Joey Martin Feek, spent years focusing on their individual careers; but they both realized they were stronger together which laid the groundwork for a collaborative songwriting and performing career. The new formation resulted in their debut on the CMT series “Can You Duet” in 2008 placing third; releasing their debut album, The Life of a Song; and winning the 2010 Academy of Country Music Award for Top New Vocal Duo.

The couple has completed four seasons of their RFD-TV series, “The Joey+Rory Show,” which is filmed in their community on their own soundstage built in the barn on their farm. The Kansas-born Rory Feek and Alexandria, Indiana born Joey Martin Feek host an annual “Bib & Buckle Fest” held on their farm in Pottsville, Tennessee. They welcome approximately 2,000 music fans each year to their homestead for this event. The award-winning duo also holds a Farmhouse Concert Series at their home.