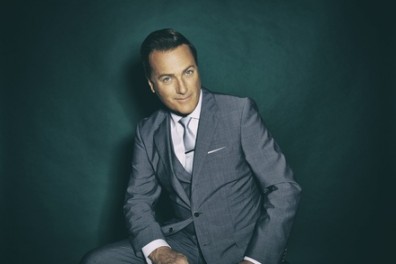 Nashville, Tenn. (September 23, 2014) – Three-time GRAMMY® winner Michael W. Smith will bring holiday cheer to audiences across the country this holiday season as he launches “The Spirit of Christmas Tour,” set to hit several cities in the U.S. and Canada. Partnering with Michael W. Smith as the official tour sponsor is Cracker Barrel Old Country Store® and joining him on all tour dates is Dove Award-winner Rachael Lampa.
Earlier this year, Michael W. Smith debuted his first classic hymns album, aptly named Hymns, exclusively at Cracker Barrel Old Country Store® and online at www.crackerbarrel.com. The tremendous success of the album, which was recently nominated for a Dove Award for Inspirational Album of the Year, led to Cracker Barrel Old Country Store® signing on as the official tour sponsor.
“I’m really happy to have Cracker Barrel as a tour sponsor,” remarked Smith. “Our local Cracker Barrel has become a very special place over the past several years. It’s where I take my Dad once a week for breakfast. We’ve shared some great memories there that I’ll always cherish. It feels great to have Cracker Barrel as part of my tour.”
“We enjoyed working with Michael and his team when we exclusively released his Hymns album earlier this year, and were so happy for them when it was recently nominated for a Dove Award,” said Cracker Barrel Marketing Manager Julie Craig. “Christmas is a time when families come together, and often they gather to share a meal at Cracker Barrel. When we were approached about sponsoring his ‘Spirit of Christmas Tour,’ we knew it would be a great fit.”
In addition to “The Spirit of Christmas Tour,” Smith will co-headline three special events with long-time friend and fellow GRAMMY® winner Amy Grant. Teaming up in Dallas, Minneapolis and Atlanta, Smith and Grant will showcase their beloved Christmas set while performing alongside the full Symphony Orchestras. Full tour dates are listed below. For more information, visit: www.michaelwsmith.com.
Smith made national headlines last month as he announced the release of Michael W. Smith & Friends: The Spirit of Christmas, featuring an all-star lineup of guests – Vince Gill, Lady Antebellum, Little Big Town, Martina McBride, Amy Grant, Carrie Underwood, Jennifer Nettles, Bono and Michael McDonald. The album will be available in stores – including Cracker Barrel Old Country Store® – as well as online on September 30.
“This is the most unique and unusual record I’ve ever done in my 31-year career,” remarked Smith. The album was co-produced by Smith, CMA Music Awards and CMA Country Christmas producer Robert Deaton and renowned orchestral maestro David Hamilton.

About Michael W. Smith:
Michael W. Smith is an acclaimed singer, songwriter, and musician who has sold more than 15 million albums, achieved 28 No. 1 songs, earned three GRAMMY® Awards, one American Music Award, and more than 40 Dove Awards. Most recently, in honor of ASCAP’s 100th Anniversary, Smith, along with Amy Grant, was honored as “a cornerstone of Christian music,” for his groundbreaking career and significant influence on the genre. Throughout his career, the Contemporary Christian Music artist has had the opportunity to sing for several Presidents and national leaders. He actively supports the teen club Rocketown, Compassion International, and Samaritan’s Purse, the ministry headed by Franklin Graham. Michael and his wife Debbie live in Middle Tennessee, where they raised their five children. So far this year, Smith has released Hymns, his first-ever classic hymns album available exclusively at all Cracker Barrel Old Country Store® locations and CrackerBarrel.com, as well as his first studio worship album since 2008, Sovereign, which took a Top 10 spot on the Billboard 200, as well as the No. 1 spot on Billboard’s Christian Albums Chart. His fourth career Christmas album, Michael W. Smith & Friends: The Spirit of Christmas, will be available September 30, 2014. For more information, visit www.michaelwsmith.com.