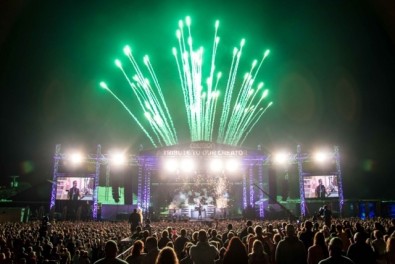 “I am blessed and excited to have Troy join with us and our shared vision for festival ministry and evangelism, to see young people challenged in their faith and to know Christ as Lord,” says Thomas.

“I am so excited to become part of the Creation Festivals and its incredible history,” says Duhon. “Our goal is to help improve and expand the festivals by creating multimedia events that include advanced video technology and incredible movies. We will incorporate personal appearances of actors at the festivals. Together, by God’s grace, we will create future events under the Come Alive name that will be geared toward millennials. We want to be at the cutting edge with youth. Our goal will be to evangelize and inspire them to defend their faith like we did in the movie, God’s Not Dead.”

The Creation Festivals, which have been featured in Time Magazine, Fuse, Fox News, VH1, Newsweek and The New York Times, currently consist of Creation Northeast, Creation Northwest, Sonshine Festival and the Ichthus Festival, which will relaunch in 2015.

“All these events, along with new ones planned for the immediate future, will continue to have a mission of evangelism,” says Thomas. “Our vision is to inspire all who come together at these events to be in community, unified as we worship our God, and growing in understanding to share our faith in confidence and love. We believe that when committed believers exalt Christ, we can change the world with the life-changing message of Jesus Christ.

“Generations have come to the Creation Festivals over the years with an expectancy to see God move by His Spirit,” reflects Thomas. “Creation has since become a movement, a gathering together of people from various denominations and backgrounds to ‘Give Tribute To Our Creator.’ The focus and purpose remains the same and it continues to impact our ever-changing culture.”

Creation Festivals are located in beautiful premier destinations. Attractions include six stages featuring performances by popular music artists in many genres and internationally-known speakers, as well as multiple events throughout the week, including an Extreme Fun Zone, kid’s entertainment and activities, interactive experiences, exhibits and much more, all for one low price.

The Creation Festivals currently consist of Creation Northeast, set for June 25-28 in Mt. Union, Pa.; Sonshine Festival, July 16-19 in Willmar, Minn.; and Creation Northwest, July 30-August 2 in Kennewick, Wash. The 2015 relaunch of the Ichthus Festival is scheduled for July 8-11 in Lexington, Ky.

For more information, visit creationfest.com, sonshinefestival.com and ichthusfestival.com.
About Creation Festivals:
Pastor Harry Thomas, Jr., and Timothy Landis founded Creation East in 1979 in Muddy Run Park in Lancaster, Pa. Since that time, the single festival has grown to two festivals on opposite sides of the U.S. (Creation Northwest was launched in 1998). The events bring together scores of Christian musicians, as well as Christian speakers and authors and a Kids Zone for a family-friendly event.

“The Creation family works tirelessly year-round to lay the foundation for people to get away from their normal routines and come to give ‘A Tribute to Our Creator,’ says Thomas. “Nothing can compare to worshiping with tens of thousands of people, being a part of the candle-lighting service, or even watching young and old be baptized.”

While Creation continues to add to its overall entertainment and artist lineup, the festival has made a conscious effort to keep the tickets at a reasonable price. Advanced tickets range from $39.00 – $99.00 per person for the entire four-day festival, providing the attendees with jam-packed entertainment, lodging and more all for about $25 a day. Creation offers free tickets to kids under 5 years of age.

To purchase tickets and for more information, visit creationfest.com.