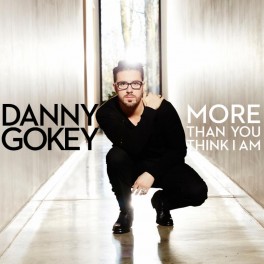 NASHVILLE, Tenn. (January 26, 2015) The New Year couldn’t have started any better for BMG Recording Artist Danny Gokey, as he and wife Leyicet welcomed new baby Victoria Isabella into their growing family. The excitement in 2015 continues in early spring as Gokey announces plans to join the Burn Bright tour with Natalie Grant, followed by The Bible Tour with Steven Curtis Chapman, Brandon Heath and Francesca Battistelli.

Just when you think it couldn’t get any better, Gokey received a nomination for the 2015 K-LOVE Fan Awards for Song of the Year for his No. 1 hit “Hope in Front of Me.” Following the success and longevity of the single, Gokey released his new single “More Than You Think I Am” to radio, marking the second single from his No. 1 album ‘Hope in Front of Me.’ “More Than You Think I Am” debuted at No. 28 on the NCA Billboard chart and is impacting Christian AC radio with early adds at K-LOVE, Air1 and SiriusXM, among others.

“More Than You Think I Am” was penned by Gokey, Bernie Herms (“Praise You In The Storm,” “Hope In Front of Me”, “East To West”), and Tim Nichols (“Live Like You Were Dying,” “Girls Lie Too”). Herms also produced the track.

“This song is very personal to me,” said Gokey. “It reflects a time in my life where I encountered personal loss and heartbreak. I had a broken soul and didn’t know what to do with it. I had a misconception of who God was to me during that time, but instead of running away from God, I ran to God asking Him to reveal Himself to me. He began to knock down barriers I had put up and began revealing who He really is. No matter what you think about who God is, understand He’s more than you think He is.”

The lyrics of “More Than You Think I Am” are highlighted in a new lyric video. Check it out: http://vevo.ly/2LzHs5

ABOUT DANNY GOKEY:
Gokey’s sophomore album HOPE IN FRONT OF ME debuted at No. 1 on multiple Nielsen SoundScan Billboard Contemporary Christian music sales charts. The title cut from the album was a multi-week chart topper and rounded out 2014 with placement on multiple Billboard Year End 2014 Christian charts including No. 7 on Christian Airplay Songs and No. 8 on Hot Christian Songs for “Hope in Front of Me.” He also landed Best of 2014 on iTunes in the Christian/Gospel format. An acclaimed singer and author, Danny Gokey made an indelible first impression with 2010′s record-breaking debut album, “MY BEST DAYS” with the best opening week for a debut album from a male country artist in almost two decades. He received an array of honors, including an American Country Awards nomination as “New/Breakthrough Artist of the Year.”

Gokey is also active on many other fronts, including his role as founder of Sophia’s Heart. Named in honor of his late wife, the organization’s goals are to provide hope and help to homeless families in Nashville, and they also operate a thriving inner-city music and arts program in Milwaukee, WI. Opened in late 2011, the 77,000 square foot Sophia’s Heart facility in Nashville has helped rescue over 100 families from life on the street. For details, please see www.sophiasheart.org.