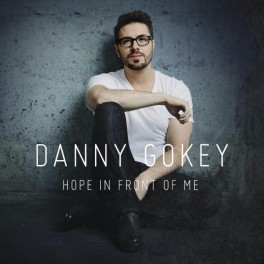 NASHVILLE, Tenn. (July 28, 2014) BMG Recording Artist Danny Gokey is partnering with the Gospel Music Association (GMA) and Christian radio to launch the ‘Danny Gokey Getaway Contest’ awarding a total of nine grand prize winners with a trip for two to the 45th Dove Awards with Gokey on October 7 in Nashville, Tenn. Fans have two ways to enter either through participating stations or DannyGokey.com.

Each of the eight ‘Danny Gokey Getaway Contest’ participating radio stations is promoting and awarding one grand prize in their individual markets with a variety of methods including social media promotions, “call-in” or “text to” prompts. For the web promotion, fans log on to DannyGokey.com and enter their story of hope and then share it with their friends and family to vote for their story for the chance to win one grand prize. Gokey encourages everyone to share their stories of hope similar to the message behind his chart-climbing single “Hope in Front of Me,” which is currently exploding at radio, from his No. 1 debuting sophomore album ‘Hope in Front of Me’.
“Danny Gokey is a man who has encountered God in very personal ways and has managed to craft his pain and his triumphs into this project making for a powerful and enjoyable musical experience,” said Jackie Patillo, president and executive director, Gospel Music Association. “The GMA is happy to partner with Danny in this 45th Dove Award ‘Danny Gokey Getaway Contest’. The Dove Awards is a platform that brings the Christian/Gospel community together to celebrate all the great ways the gospel is being spread through music. It’s the biggest night in Gospel Music!”

Gokey will host a Twitter chat to talk about the Dove Awards grand prize trip and answer fan questions on Wednesday, July 30 at 7:00p.m. CST. #GokeyGetaway

Grand Prize:
2 tickets to the 45th Dove Awards (October 7, 2014)
VIP Meet & Greet with Danny prior to the awards
Round trip (coach) airfare for 2
Hotel accommodations for 2 (1 room) for 2 nights
Ground transportation in Nashville
Meal per diem
*The online contest runs July 28 to August 18. Radio station promotions run throughout the month of August, with the first promotion beginning August 5.

Get inspired to share your stories of hope by watching Danny’s “Hope in Front of Me” music video: https://www.youtube.com/watch?v=O5GFiDdGGGM

Tune in to TBN tonight to catch Gokey sing songs from his ‘Hope in Front of Me’ album and chat with host Jason Crabb about music, family, Sophia’s Heart and more. Check local listings for programming details.

ABOUT DANNY GOKEY:
A top 3 finalist on the eighth smash season of Fox’s American Idol, Danny Gokey soon entered the record books as the first-ever male American Idol contestant to sign with a major country label. An acclaimed singer and author, Gokey made an indelible first impression with 2010′s record-breaking debut album, “MY BEST DAYS” with the best opening week for a debut album from a male country artist in almost two decades. He received an array of honors, including his home state’s WAMI (Wisconsin Area Music Industry) Award for “Male Vocalist of the Year” as well as an American Country Awards nomination as “New/Breakthrough Artist of the Year.” Gokey’s sophomore album HOPE IN FRONT OF ME debuted at No. 1 on multiple Nielsen SoundScan Billboard Contemporary Christian music sales charts and is available wherever music is sold. Gokey is also active on many other fronts, including his role as founder of Sophia’s Heart. Named in honor of his late wife, the organization’s goals are to provide hope and help to homeless families in Nashville, and they also operate a thriving inner-city music and arts program in Milwaukee, WI. Opened in late 2011, the 77,000 square foot Sophia’s Heart facility in Nashville has helped rescue over 75 families from life on the street. For details, please see www.sophiasheart.org.