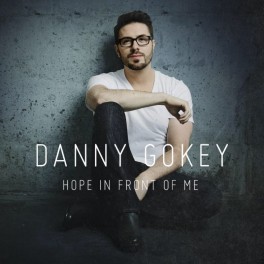 June 24TH, 2014, Nashville/New York) Acclaimed singer, author, and American Idol favorite, Danny Gokey has just released his highly anticipated sophomore album, HOPE IN FRONT OF ME. The album, which hit stores yesterday, is already at the top of the iTunes Christian and Gospel Charts and #1 on the Amazon digital charts.

In celebration of the release, a series of exciting week-long promotional activities has been scheduled, including a Twitter fan chat at 6:30pm CST this evening, followed by a 7pm CST live stream tonight of Gokey performing all new songs from HOPE IN FRONT OF ME, along with a sneak peek of the “Hope in Front of Me” video, shot in his current hometown of Nashville. The digital engagement with fans is fresh on the heels of Gokey’s Saturday, June 21st performance at House of Blues in Houston as well as a wide range of high profile media appearances in recent months, including a stellar rendition of the National Anthem at Brooklyn’s world famous Barclays Center, visits to radio stations across the country as well as such TV outlets as FOX Good Day, REELZChannel’s OK! TV, The Better Show, and TBN.

“I really wanted to just capture more of who I am with this record,” Gokey says, “more of the soul, and more of all of me as an artist. It’s got a big sound to it, which I love. The track, ‘Hope In Front Of Me,’ is just the tip of the iceberg. I’ve got some songs on there that I hope people are going to really love.” A top 3 finalist on the eighth smash season of Fox’s American Idol, Gokey instantly earned popular acclaim as a vocal master blessed with the uncanny ability to turn any song into a compelling moment. Tragically, his soulful performances were fueled by unimaginable loss, his beloved wife Sophia having passed away just four weeks prior to his taking the Idol stage. The Idol top 3 Season 8 contestant, the self effacing Gokey made an indelible first impression with 2010′s record-breaking debut album, “MY BEST DAYS.” Now, after four years of creative development and production, the multi-talented artist/performer unveils his stunning second, a moving and deeply personal collection that marks an immense leap forward in craft, performance, and emotional impact. Described by Gokey as “songs of hope and entertainment,” “HOPE IN FRONT OF ME” sees him joining forces with some of today’s most honored songwriters and producers, including award-winning “Producer of the Year” Bernie Herms (Natalie Grant, Casting Crowns, Barbra Streisand, Andrea Bocelli), multiple GRAMMY® Award-winner Keith Thomas (Amy Grant, Blake Shelton, Heather Headley, Vanessa Williams), and Josh Crosby (Cher, Owl City, Mat Kearny). Resonant with hard-earned soulfulness and redemptive compassion, the album confirms Danny Gokey as a groundbreaking artist with a rare gift for deep connection with audiences everywhere.

The title track to the album, “Hope In Front Of Me” is currently ascending the top 15 at Christian radio outlets nationwide. Co-written by Gokey with chart-topping tunesmiths Bernie Herms (Casting Crowns, Natalie Grant, Barbara Streisand) and Brett James (Taylor Swift, Carrie Underwood, Jason Aldean). What’s more, a behind-the-scenes look at the making of “HOPE IN FRONT OF ME” – along with a bounty of video clips and live performances – is streaming now at Gokey’s official YouTube channel, www.youtube.com/dannygokey.

Gokey is also active on an array of other fronts, including his role as founder of Sophia’s Heart. Named in honor of his late wife, the organization’s goals are to provide hope and help to homeless families, provide scholarships to deserving students, and operate a thriving inner-city music and arts program. Opened in late 2011, the 77,000 square foot Sophia’s Heart facility in Nashville has helped rescue over 75 families from life on the street. For details, please see www.sophiasheart.org.

Furthermore, Gokey has also teamed with Match Eyewear for the Danny Gokey Eyewear collection, embodying the soulful, playful attitude that defines him and his music. The Danny Gokey Collection models are a modern interpretation of vintage charm, speaking directly to the classic, genuine and unique style of Gokey’s distinctive brand and delivering contemporary cool to men and women between 18 and 35. Launched in March 2012, the collection has exceeded sales projections with over 2 million in net retail sales. For more, please visit www.matcheyewear.com.