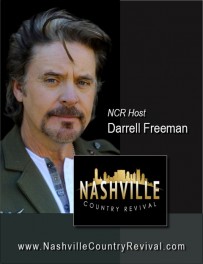 Franklin, TN (Mansion Entertainment) September 19th, 2014 – Due to the popularity of the TV show Nashville Country Revival, Mansion Entertainment has announced plans for a third year of production of the show and will add Gospel Music personality and performer, Darrel Freeman, as the host. Freeman got his start at the young age of 13 in his family band and has since garnered much success and popularity with his own family group, The Freemans. Over the years The Freemans have scored multiple chart topping songs and garnered industry nominations and awards. In addition to naming Freeman as the new face of NCR, Mansion has partnered with Big Merlin Productions to produce the future episodes.
Nashville Country Revival was initially launched on The Nashville Network (now Heartland TV) two years ago and since that time has gained popularity and a strong following with its appearances on major networks such as Daystar TV, TCT and other national platforms. The show found a niche with viewers by offering inspiring music with a Country and Bluegrass flavor from popular artists such as Danielle Peck, Brand & Dean, Marty Raybon, Jeff & Sheri Easter, Red Roots, Brad Davis, Jason Crabb while introducing a host of new talent to its viewers as well.
NCR recently entered new territory with nine episodes of NCR being launched on Hulu. Amazon Prime will come on board in the near future offering Nashville Country Revival episodes to its subscriber base as well. Future episodes with host Darrel Freeman will be launched by the end of 2014 on both Hulu and Amazon Prime.
For more information on Nashville Country Revival visit www.nashvillecountryrevival.com.