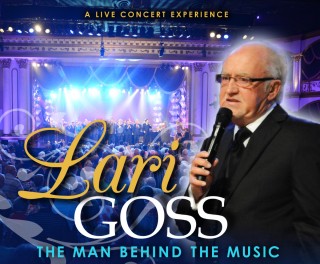 Hendersonville, Tenn. (March 6,2015) Daystar TV will be airing Lari Goss: The Man Behind The Music​ on March 10th at 11 am and 8pm CST. Originally filmed in 2012, this hour-long special features the most prominent groups in Southern Gospel music, including Greater Vision, Booth Brothers, the Hoppers, Legacy Five, Mark Trammell Quartet, Ernie Haase & Signature Sound, as well as many others, paying tribute to the GRAMMY & Dove award winning writer, arranger and producer, who provided them with life-changing songs and arrangements. Following his recent passing, Jim Brady & Gerald Wolfe partnered with Daystar TV to bring this moving tribute to TV and honor the legacy of the prolific producer who touched so many lives.

Lari Goss: The Man Behind The Music is available on DVD and can be found at your local Christian bookstore, or online at daywind.com​ .

Daystar can be seen on Dish Network Channel 263, DirecTV Channel 369, or streamed online at daystar.com/watch. To find Daystar in your area, visit daystar.com.