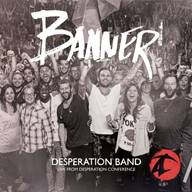 The youth worship band at Colorado Springs-based New Life Church, Desperation Band, releases its all-new album, BANNER, internationally Sept. 30 through Integrity Music. Recorded live during the July 2014 Desperation Conference, the 12-song album captures the spirit and energy of youth at worship during the conference, while sharing a deeply-rooted belief that the God of ages past is alive, well and moving mightily among people who are desperately committed to Him.

Written specifically with today’s students in mind, BANNER is deliberate both sonically and lyrically as it connects the past with the present and the future.

“We want to make sure we’re singing songs that help young people understand they are in a moment of time, but that the church has existed for thousands of years,” New Life Church worship leader Jon Egan explains. “We want to place an emphasis on history, returning to the sacred call to worship.”

Simultaneously, as the Desperation Band evolves musically, Egan adds, “We want to inspire those who come after us. We want to lead and be pioneers and be bold in that…we have nothing to prove, and in that we have the freedom to take some risks.”

Egan, who helped form Desperation Band in 2001 and now mentors a new generation of worship leaders and songwriters at New Life Church, co-wrote with Jason Ingram, Jonathan Moos, Nico Perez and others for the new album. For the title track, Egan shares, “I’d been wanting to write a song about God being our banner, the ancient truth that God is with us, leading the march through history. One of our young guys came in with some music and I brought some direction for the lyrics, and it just came together. It’s so ancient, so ‘Moses and the Old Testament,’ yet to these guys it seems fresh and cool, which I think is great.”

The new album also features, “Break Open,” a song of surrender to Christ inspired by the story of Mary’s extravagant gift of perfume on the feet of Jesus, “Fun,” a full-tilt dance celebration song written by Egan, Ingram and Cory Asbury, and one of Egan’s personal favorites, “Make A Way.”

“‘Make A Way’ has been blowing up at our church and at youth events,” he says. “I think they have really connected with it because it gives a voice to people believing for miracles. We did a 5-city tour, and in every city I found myself looking at hundreds of 15-year-olds, thinking, ‘So much will be thrown at you…but the answer has always been Jesus. It always will be Jesus.’ When I was fleshing that out for a song, I was reminded that where there was no way, Jesus made a way at the Cross…and He still makes a way.”

“Make A Way,” as well as the title track and “Break Open,” are available as instant downloads when BANNER is pre-ordered at iTunes. Global pre-orders for both the “standard” and Digital Deluxe versions of the album begin today at iTunes and Amazon.com. The Digital Deluxe version features a digital booklet with song charts and four live performance videos: “Banner,” “Make A Way,” “Break Open” and “We Are Yours.” The US version of the Digital Deluxe will further feature a 45-minute video track with a spoken word message from Desperation youth pastor David Perkins.

Having never lost sight of the limitless potential of students to impact their world for Christ, Desperation Band is planning to take its message, new songs and favorites like “I Am Free,” “Overcome,” “Yahweh” and “Strong God,” on the road for an extensive, international tour spring 2015. Over the years, the band has led worship for hundreds of thousands of high school and college students through its touring and at the annual Desperation Conference. As the band gears up for the new tour, booking and event related inquiries are being directed to contact@709agency.com.