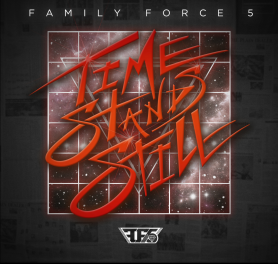 Alternative Pop/Rock band Family Force 5 premieres for the first time its highly anticipated, first studio album in three years, Time Stands Still, releasing Aug. 5 from Word Entertainment. Beginning today and through Aug. 4, fans can stream all 15 songs on the acclaimed new album for free one full week before release, as well as pre-order the album, through Amazon.com.

With momentum continuing to build for the release of Time Stands Still, Family Force 5 gets ready to celebrate with an exclusive, one-hour live streaming event on release-day (Aug. 5) from

YouTube Space LA beginning at 3:00 pm PDT/6:00 pm EDT. Each member, Derek Mount (“Chap Stique” / guitar, vocals), Jacob Olds (“Crouton” / vocals, drums), Joshua Olds (“Fatty” / bass, vocals), Nathan Currin (“Nadaddy” / keyboards, vocals, percussion) and Teddy Boldt (“Hollywood” / drums, percussion), will be locked in a room designed to specifically suit each of their personalities, and the only way for them to get out is for their fans to “demand” their favorite member is unlocked through various social media actions. The more they tweet, post and share socially about their favorite band member, the sooner the band member is unlocked. Fans can monitor the progress at www.FamilyForce5.com, and once “unlocked,” the band members will be reunited for a live question and answer session with fans from the YouTube Creative Space in LA.

Family Force 5, which has been at the forefront of driving video content throughout its career, released its first music video from Time Stands Still “BZRK (feat. KB)” May 23. Already gathering over 434,000 views and 3,800 likes on YouTube, the video also went berserk on MTV.com, becoming the No. 1 most viewed music video on the site. The song is also a Top 15 Rock hit from the album at Christian radio and continues to gain spins at stations around the country, including being added to rotation recently at KRNG (Reno, NV) and WVOF (Bridgeport, CT).

Known for electrifying crowds worldwide with its unique blend of dance and rock, Family Force 5 will be taking new music from Time Stands Still, along with fan favorites, on the road with Newsboys and 7eventh Time Down. The 28-city “We Believe Fall Tour” begins Sept. 18 in Memphis (Germantown, TN) and traverses the country before wrapping up Nov. 16 in Youngstown, OH. Family Force 5 continues its current summer tour at numerous festivals, theaters and arenas around the country, including Creation Northwest (8/2, Kennewick, WA), Rock The Desert (8/8-9, Midland, TX) and more. For the latest tour itinerary, go to www.facebook.com/familyforce5/app_123966167614127.

Produced by Riley Friesen and Seth Mosley, Time Stands Still also features “Sweep The Leg,” “Glow In The Dark” and more songs that Family Force 5 member Jacob Olds says “step outside of the box from the way faith-based artists have traditionally sounded and worked.”

About Family Force 5
Alternative Pop/Rock band Family Force 5 formed in Atlanta in the summer of 2005. The band has not only joined The Vans Warped Tour and headlined The Alternative Press Tour, but also performed at Sonisphere Festival, Bamboozle Festival, Rock and Worship Roadshow, Parachute Festival and toured with artists such as TobyMac, Cobra Starship and Flyleaf. Creating chart-topping albums and achieving impressive success at radio with singles such as “Superhero” and “Not Alone,” Family Force 5 has further had its music featured on ESPN and has received more than 30 million YouTube views of its official music videos.