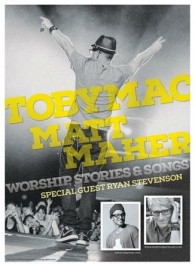 Nashville, Tenn. (July 18, 2014) – Five-time GRAMMY® Winner TobyMac has announced the “Worship, Stories & Songs Tour” which will hit the road this fall and will feature Matt Maher and Ryan Stevenson. TobyMac, who is renown for his live performances, will bring together the three artists in a night of fellowship in intimate venues and musical settings across the country.

The “Worship, Stories & Songs Tour” will be a totally different TobyMac show, a time where it’s not about the lights, smoke or big stage. Instead, it will be more intimate and personal, a “storyteller’s night” where Toby will share where the songs came from.
Kicking off in Madison, MS on November 6, the tour will make select stops in 20 cities before wrapping in Ft. Wayne, IN in mid-December. For full tour dates and more information, see below.

About TobyMac:
With over 11 million units in career sales, TobyMac’s career continues on the fast track. His most recent project, Eye On It, garnered him the GRAMMY® Award for Best Contemporary Christian Music Album and the highest chart debut of his solo career landing at No. 1 on the Billboard 200 and topping the iTunes® Overall and Christian sales charts. The project made TobyMac one of only four artists to ever debut atop the Billboard Top 200 with a Christian music album. His previous four solo projects have received RIAA Gold Certifications and his live DVD, Alive & Transported, is RIAA Certified platinum and received a GRAMMY® award. In less than 15 months between 2012-2013, TobyMac received two GRAMMY® awards, two Billboard Music Awards for Top Christian Artist and Top Christian Album, his first American Music Award for Favorite Artist in the Contemporary/Inspirational category, Dove Awards for “Artist of the Year,” “Pop/Contemporary Album of the Year,” “Recorded Music Packaging of the Year,” “Short Form Video of the Year,” a K-LOVE Music Award for “Artist of the Year” and swept the 2013 Australian Music Award. At the 2014 K-LOVE Fan Awards, he won the award for “Best Live Show.”
[Get Connected with TobyMac]
Website // http://www.tobymac.com
Twitter // https://twitter.com/therealtobymac
Facebook // http://www.facebook.com/tobymac
YouTube // http://www.youtube.com/tobymacmusic
iTunes // http://toby.cta.gs/02r

About Matt Maher:
Recording artist, songwriter and worship leader, Matt Maher is well known for writing worship anthems that influence church worship services worldwide, including “Your Grace Is Enough,” “White Flag,” “Lord I Need You,” and “I Will Rise.” His songs continue to climb the CCLI charts and have been recorded by Chris Tomlin, Matt Redman, the Passion movement and more. Maher’s credibility as a writer has been galvanized by recognition from the GRAMMYs®, where Maher has garnered four GRAMMY® nominations, two in the Contemporary Christian Music Song category, 54th and 55th GRAMMY® seasons for “I Lift My Hands,” “White Flag,” and two in the 56th season for Contemporary Christian Music Performance for “Lord, I Need You” and Contemporary Christian Music Album, All The People Said Amen. Maher’s songs have prompted career sales of more than 410,000 albums and generated national media coverage on outlets including “FOX & Friends” and as a guest writer with Billboard magazine. In the summer 2013, Maher was chosen to be the face of three million Dr. Pepper cans in conjunction with Pepsi MidAmerica and its Christian artist can campaign. Maher played at the 2013 World Youth Day in Rio de Janeiro where he performed his renown songs, including Billboard NCA hit single “Lord, I Need You,” and was selected to play for Pope Francis’ Beachside Vigil, attended by over 3 million people. For more information on Matt Maher and All The People Said Amen, visit www.mattmahermusic.com. Also follow Matt on Twitter at www.twitter.com/mattmahermusic.

About Ryan Stevenson:
After capturing TobyMac’s attention, Ryan Stevenson—who spent seven years as a paramedic—was signed to an exclusive recording agreement with the iconic artist’s record label Gotee Records in 2013. Since then, he’s been nominated for a GRAMMY® as a song-writer on TobyMac’s latest single “Speak Life,” toured with Audio Adrenaline, seen his debut single “Holding Nothing Back” become a Top 25 Christian AC and National Christian Audience charting song and opened up TobyMac’s 2014 Hits Deep Tour. The Pacific Northwest native is a husband and father of two boys and currently serves as worship leader at Vertical Church Boise. His Gotee debut, the 4-song Holding Nothing Back EP, is available at all digital outlets now.