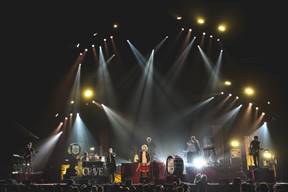 Featured on The Tonight Show with Jay Leno as a debut artist, gathering “New Artist of the Year” and “Breakthrough Artist of the Year” awards, and having the top-selling debut release from 2012 in its genre, for KING & COUNTRY continue their journey toward the Sept. 16 release of its highly-anticipated, sophomore album RUN WILD. LIVE FREE. LOVE STRONG.. With soaring melodies, driving rhythms, theatrical instrumentation and personal themes being the heartbeat of the album, the recording and duo, consisting of brothers Joel and Luke, receive a significant endorsement from the Gospel Music Association today, garnering four GMA Dove Award nominations. The nominations were announced from Lipscomb University’s Allen Arena, where the 45th Annual GMA Dove Awards ceremony is set to take place Oct. 7.

“We started playing that song at the beginning of 2013 and we knew it had this special life to it,” says Joel. “There is something really serendipitous about it. I think it is one of those songs that you can’t help but smile when you listen to it because it has depth along with an up-tempo, celebratory excitement and gratitude for life, which represents this new record really well.”

Hitting the top of the Hot AC/CHR chart this week, “Fix My Eyes” has remained in the Top 5 on iTunes Christian/Gospel singles chart since its release May 1. In addition, Nielson BDS reports that the single had the most stations supporting first-week at Christian AC/CHR radio than any song since 2009, including 100% of the Christian CHR panel. With 114 reporting outlets (including national networks) currently spinning “Fix My Eyes,” the song garners triple digit spin increases at both AC Monitored and Indicator charts this week and hits No. 3 with a bullet on the National Christian Audience Airplay Billboard chart. The song also jumps to No. 4 on the AC Indicator chart. An inside look at the inspiration behind the song “Fix My Eyes” can be seen at http://smarturl.it/fixdoc.

Available for pre-order now, iTunes is offering three Instant Grat Track downloads from RUN WILD. LIVE FREE. LOVE STRONG., including “Fix My Eyes,” encouraging anthem “It’s Not Over Yet” and the newest single, “Without You (Feat. Courtney),” which hit No. 1 on the Christian & Gospel Top Songs iTunes® chart and is an inspiring, real life message of hope that features a beautiful duet with Luke’s wife Courtney.

Playing the new songs and fan favorites like “The Proof Of Your Love” from Crave, for KING & COUNTRY embarks on a major market, 40-city fall “YOU MATTER – THE TOUR” that launches Sept. 14 in Nashville (Franklin, TN). The tour then continues into significant venues in cities like Los Angeles (Chino and Riverside, CA), Washington, D.C. (Woodbridge, VA), Pittsburgh, Indianapolis, San Diego, Las Vegas, Austin, Albuquerque and more before wrapping up in New York City Nov. 23. Being sponsored by Compassion International, all “YOU MATTER – THE TOUR” dates, as well as tickets, are available now at www.forkingandcountry.com.

With RUN WILD. LIVE FREE. LOVE STRONG., for KING & COUNTRY has created an album that lives up to the band’s name, a reflection of standing and fighting for something bigger than yourself, a mission statement that drove the duo from the first words written for this project until the last note was recorded.