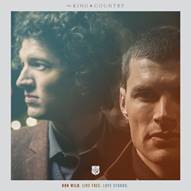 The 5-star-acclaimed sophomore album from for KING & COUNTRY, RUN WILD. LIVE FREE. LOVE STRONG., released Sept. 16 from Word Entertainment and immediately soared to No. 1 on the Christian/Gospel and top 5 on the overall iTunes Albums charts (http://smarturl.it/rwlfls). This week the album from Australian brothers Joel and Luke becomes the duo’s first top 15 on the Billboard Top 200, landing at No. 13. Reflecting the duo’s mission to stand and fight for something bigger than oneself, “to live a life that is for others – a life that is others-focused, God-focused,” says Joel, the recording also beats by nearly five times the first week sales of their debut album, Crave, which became the highest-selling debut from a new artist when it released in 2012.

In addition to the success of the new album, the recording’s multiple 2014 GMA Dove Award-nominated lead single, “Fix My Eyes,” was featured this week on NBC’s TODAY show. The song, slated to be heard during the show over the next few weeks, has also sold well over 112,000 downloads, hit No. 1 on the Billboard Christian Songs Chart and continues to hold the No.1 position for the seventh consecutive week at CHR radio.

Remarkably, “Fix My Eyes” is not the only song featuring for KING & COUNTRY to land at No. 1 this week. The duo’s collaboration with LeCrae, “Messengers (feat. for KING & COUNTRY),” lands on top of Billboard’s Gospel Digital Songs chart. The song is featured on LeCrae’s Anomaly, which was the No. 1-seller on Billboard’s Top 200 last week, and has now sold over 120,000 copies. for KING & COUNTRY and LeCrae kept close company this week on iTunes’ Albums chart, sitting side-by-side in the top 10.

As the momentum continues at radio and retail, for KING & COUNTRY’s major market, 40-city fall YOU MATTER—THE TOUR continues to see capacity crowds. Following sold-out events in Nashville (Franklin) and Knoxville, TN, and 6,000-plus people in attendance in Louisville, KY, the tour continues with sold-out events in Pittsburgh tonight, Indianapolis tomorrow and Mansfield on Friday. The tour will then continue into cities like Washington, D.C. (Woodbridge, VA), San Diego, Las Vegas, Austin, Albuquerque and more before wrapping up at the Sun National Band Center in Trenton, NJ (11/22). Sponsored by Compassion International, all YOU MATTER—THE TOUR dates and tickets are available now at www.forkingandcountry.com.

The tour features hits like “The Proof of Your Love” from Crave, for KING & COUNTRY’s critically acclaimed debut album, “Without You (Feat. Courtney),” their first concept music video from RUN WILD. LIVE FREE. LOVE STRONG. (www.youtube.com/watch?v=4_zcjxDdZ1s), “To The Dreamers,” which is featured in “The Shows That Touch You” NBC campaign to promote its fall lineup (http://youtu.be/nPHXIsip5pE), “It’s Not Over Yet,” which CBS featured during its airing of the Men’s Semifinals of the US Open Tennis Championships, “Fix My Eyes” and more new songs.

The new hits have been cultivated from a long, at times painful, but ultimately enriching journey that led to the recording of RUN WILD. LIVE FREE. LOVE STRONG., and is chronicled in a new video featured at http://smarturl.it/fkcepk. Fox News tapped into the video for a feature that went out to its nationwide affiliates last week.

Nominated for four 2014 GMA Dove Awards, for KING & COUNTRY is also set to perform “Fix My Eyes” on the 45th Annual GMA Dove Awards Oct. 7, which will air on the Trinity Broadcasting Network (TBN) Oct. 12. The duo further played during the 16th Annual GRAMMY Block Party in Nashville, and completed an interview with Grammy.com that can be seen at https://www.youtube.com/watch?v=uNI3RRc2WVM.

About for KING & COUNTRY
The duo was named “New Artist of the Year” at the 44th Annual Dove Awards and “Breakthrough Artist of the Year” at the first annual K-LOVE Fan Awards. They made their late night debut performing their hit song “The Proof of Your Love” on The Tonight Show with Jay Leno and the song was named iTunes’ Breakthrough Christian & Gospel Song of the Year. ET’s The Insider said for KING & COUNTRY “makes music that speaks directly to your heart” and have been “gaining popularity in the alt-rock genre.” American Songwriter commented that “for KING & COUNTRY may just be Australia’s answer to Coldplay.” In 2012, they were named one of Billboard’s 17 acts to watch and were CCM’s best-selling new artist.