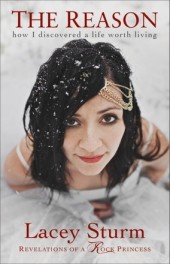 Nashville, Tenn. (July 31, 2014) – From suicide attempts, drug use and physical abuse to finding faith and purpose, Lacey Sturm gets real in her upcoming book “The Reason – How I Discovered a Life Worth Living,” set to hit shelves in October (Baker Books). In her personal story, the former Flyleaf singer shares her journey from atheism to salvation and how she found faith on the day she planned to end her life.

More than another “rock star autobiography,” “The Reason” leads readers down the rocky path that led Sturm to the founding of the popular band Flyleaf. Sturm deftly weaves her story in vivid detail while offering poignant insights that speak to the “Why?” behind her struggles. Sturm wrote “The Reason” in hopes that it would speak to those dealing with similar struggles.

At age ten, Sturm began to doubt the existence of a good God when she lost her cousin to abuse. Her young life spiraled out of control as she dealt with her own abuse by letting her anger and confusion guide her into drugs and depression. She gave up on God; her only solace came through tears as she cried herself to sleep each night. As she was lying in bed one night, she decided to end the pain for good and planned to commit suicide the next day. The next morning, however, Sturm got into a screaming match with her grandmother, who tried to force her to go to church. To stop the yelling, she went to church, never anticipating what she would find there – a reason to live.

Sturm dedicates the book “To the one like my teenage self, who is a breath away from finding the beauty of a life worth living. To whoever needs to know that God loves you and has a plan for your life, and though you will die one day, he doesn’t want you to die tonight.”

The book’s foreword is written by Brian “Head” Welch, co-founder and guitarist for the GRAMMY®-winning metal band Korn and former drug addict. In “The Reason,” Welch mentions his own struggle with depression before becoming a Christian and says “A book with this much substance will, without a doubt, live on to change lives for generations.”
Here’s what others are saying about “The Reason – How I Discovered a Life Worth Living:”

“Fresh. Passionate. Powerful. Lacey Sturm does in “The Reason” what she has done her whole career—she tells the truth, sings the truth, dances the truth. Her story will blow you away, and her heart will touch you.” —Chap Clark, Ph.D., author of “Hurt 2.0: Inside the World of Today’s Teenagers”

“In a time where the gulf between sacred and secular seems to grow incrementally, Lacey bridges the gap with her soulbearing candor, raw passion, and prophetic insight.” —John L. Cooper, lead singer of Skillet

“At its core, Lacey’s story is one of hope. From desperation to redemption to victory, this is an amazing journey that, apart from God, would not be possible.” —Michael W. Smith, singer and songwriter

“Lacey Sturm is a voice of hope to a hurting generation. In her book, you will experience God’s unstoppable heart for you and for those in your life who need a supernatural reset.”
—Nick Hall, Founder of PULSE Movement

“The Reason: How I Discovered a Life Worth Living” is now available for pre-order through Amazon, iTunes and Barnes & Noble.
Sturm is currently in the studio writing and recording songs for her upcoming mainstream solo release. Additional details on the album are coming soon.

About Lacey Sturm
In 2002, Lacey Sturm co-founded Flyleaf and led the rock band to international success as its frontwoman. The band’s single “All Around Me” went platinum, soaring to the top 40 on the Billboard Hot 100 chart and earning recognition as an award-winning song at the 2009 BMI Pop Awards. “All Around Me” was one of many successful Flyleaf songs as numerous other singles landed on Billboard’s Alternative, Rock and Christian charts. Sturm left Flyleaf in 2012 to focus on a solo career and has had success outside of the rock band, including performing on Third Day’s single, “Born Again,” which received GRAMMY® nominations for Best Gospel Song and Best Gospel Performance, and which Billboard acclaimed Sturm’s vocal performance to be “gorgeous.” She is also featured in “Take The Bullets Away,” with Atlantic Records recording artist We As Human, currently a top 20 and rising Active Rock hit, while Sturm’s song “Heavy Prey” featuring Geno Lenardo appeared on the soundtrack for the 2012 major motion picture “Underworld: Awakening.” Sturm now uses her influence to speak out to others about her life-changing faith. Part of The Whosoevers, a youth-focused movement to positively impact today’s music, skateboarding and art culture, Sturm also performs and speaks for the RESET Movement, rallying students and young adults to pray for a spiritual awakening in the United States. Additionally, Sturm partners with the Billy Graham Evangelistic Association to share her message of hope and recorded a song for the association called “Mercy Tree,” which can be heard on her website. The song and Sturm’s personal story were featured in Billy Graham’s 2013 sermon and film “My Hope America – The Cross.” She was also a special guest at Graham’s 95th birthday party celebrating the short film.
[Get Connected with Lacey Sturm]
Website: http://laceysturm.com
Facebook: https://www.facebook.com/LaceySturm81
Instagram: http://i.instagram.com/ilovejoshsturm
Twitter: https://twitter.com/laceysturm
YouTube: http://www.youtube.com/user/LaceySturm81