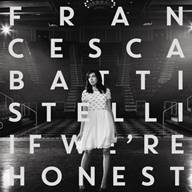 GRAMMY®-nominated, “Artist of the Year” Dove Award winner and Christian music’s best-selling new artist in over a decade, Francesca Battistelli garners her 23rd Dove Award nomination this week for Pop/Contemporary Album of the Year for her No. 1 selling, critically acclaimed recording, If We’re Honest. The nomination was announced from Lipscomb University’s Allen Arena, where the 45th Annual GMA Dove Awards ceremony is set to take place Oct. 7.

Produced by GRAMMY®-nominated and Dove Award-winning producer and her longtime collaborator Ian Eskelin, If We’re Honest reveals Battistelli’s most intimate and accomplished musical statement yet, showcasing her trademark pop and soul-infused sound. The 11-track album and 15-track deluxe version of If We’re Honest, featuring the No. 1 song “Write Your Story” and current hit single, “He Knows My Name,” are available everywhere great music is sold, including on iTunes at http://smarturl.it/ifwerehonest.

Since her debut in 2008, Francesca Battistelli has earned a GRAMMY® nomination (Best Gospel Performance), six Dove Awards (including 2011 “Artist of the Year”) and 23 Dove Award nominations. Her debut album, My Paper Heart (album RIAA Certified Gold in 2012, featuring “Free To Be Me” RIAA Certified Gold in 2014), and 2011 sophomore release, Hundred More Years, both landed at No. 1on Billboard’s Christian Album chart, while her current and third album, If We’re Honest, took the No. 1 spot on the Christian overall SoundScan chart. With over a million in album sales to date and nearly 2 million single downloads, she is the best-selling new artist in the genre in over a decade. Making her national morning TV debut this year on ABC’s “Good Morning America” performing her No. 1 single, “Write Your Story,” followed by a performance of the song on “Fox & Friends,” Battistelli’s music has also been featured on major motion pictures and nationally televised ABC, NBC and FOX shows.

For more information on Francesca Battistelli, her touring and If We’re Honest, please visit, www.francescamusic.com, facebook.com/francescabattistelli and @francescamusic.