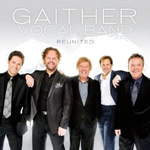 They’re baaaack! And their fans couldn’t be happier! REUNITED is the much anticipated CD of the version of the Gaither Vocal Band that included such powerhouse talents as Michael English, Mark Lowry, and David Phelps, along with Bill Gaither. Add to that the vocal stylings of Wes Hampton, and you’ve got a hit CD and concert tour that’s selling out fast.

If their rousing “Sinner Saved By Grace” and “Worthy is the Lamb” doesn’t stir you, you might want to breathe on a mirror to make sure you’re still kicking. In fact, you won’t get very far into the CD before it becomes abundantly clear that you are listening to a once, make that twice, in a lifetime combination of unbelieveable talent.

So what could be better than having these five together again on stage and in the studio? It would be these five singing nothing but Gaither classics. Every song on the CD was penned by songwriting legends Bill and Gloria Gaither.

REUNITED runs listeners through a variety of emotions–all of them good–and closes with a worshipful live version of “There’s Something About That Name.” Other songs of note on the CD are “Because He Lives,” “The King Is Coming,” and “It Is Finished.”

If you’re a Gaither Vocal Band fan, this is the CD you’ve been waiting for.