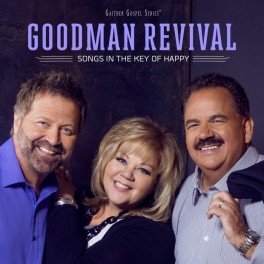 NASHVILLE, Tenn.—October 9, 2014—Gaither Music Group is excited to announce a partnership with newly formed trio Goodman Revival, of Smyrna, TN. Tanya Goodman Sykes, Michael Sykes and Johnny Minick, each of whom are seasoned Christian music veterans, have joined together to perform and record as a trio, capturing the musical styles and heritage that have endeared them to countless people around the world.
“This music has become the fabric of our lives,” describes Goodman Sykes. “The legacy of my family has contributed to each of us. They were our mentors. They taught us to not do what everyone else does…but to be true to what you are. So we chose the songs we loved and put our fingerprints on them. If we can honor our roots and sing with the same spirit that inspired us, we will feel accomplished.”
Accomplishments are nothing new to this team of veteran singers and musicians. After singing with her family, including her father, Rusty Goodman, as a teenager, Tanya performed solo concerts and toured with Michael whom she had met and married while traveling. Amidst becoming a mother to two daughters, she found time to be a member of the trio Heirloom, record a GRAMMY® Award-winning album of lullabies for children, sing on numerous recordings as a Nashville studio singer and become a featured soloist in Nashville’s Christ Church Choir.
Before playing piano on the road with The Goodmans, Michael toured with artists including the Hemphills, Ponder, Sykes & Wright, Sammy Hall and Willie Wynn and the Tennesseans. He then began working as a producer where he blossomed, shaping the recordings and careers of artists including the Gaither Vocal Band, The Martins, The Oak Ridge Boys, J.D. Sumner & The Stamps, The Imperials, Dottie Rambo, Russ Taff and Michael English among others.
On the road since the age of 17, Minick performed with The Happy Goodman Family in the mid-‘70s as a piano player before starting his own family group. In 1996, he rejoined The Goodmans, forming a trio with Howard and Vestal Goodman. The three of them toured together for five years, recorded several projects and appeared regularly on the Gaither Homecoming events. In addition to his singing career, in 1993, Minick started River of Life Church, in Smyrna, TN, which he still pastors today.
“Singing with Goodman Revival feels like more of a gift than anything,” explains Minick. “God has given us something with this. We love what we do, and we spend a lot of time laughing!”
“There is a trust between us,” says Goodman Sykes. “Friendship is at the core of what we are doing, and we have a wealth of shared experience, growing up in church all the time and having this music as such a big part of our lives. We are taking things a day at a time, walking through doors as they open and enjoying this adventure.”
Part of that adventure has resulted in their debut recording, Songs in the Key of Happy (Gaither Music Group), which is scheduled to release in January of 2015, along with a companion live performance video hosted by Bill Gaither.
“We are all ‘family,’ so we have a good time,” explains Sykes. “Our time together in the studio, well, I can hardly talk about it. It’s real. I didn’t expect to feel this. It just feels right.”
The Songs in the Key of Happy CD and DVD will be exclusively distributed by Capitol Christian Distribution and will be available throughout general market stores and the Christian marketplace in addition to online retailers including iTunes, Amazon and www.gaither.com.
For further information, connect at facebook.com/GoodmanRevival or on Twitter: @GoodmanRevival.