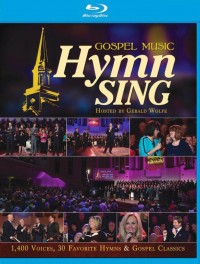 MORRISTOWN, TN – September 11, 2014 – Gerald Wolfe has announced the upcoming release of Gospel Music’s first-ever BluRay Disc. The “Gospel Music Hymn Sing” recording will be the first Gospel Music event to be released in the High-Definition, BluRay video format. The BluRay Disc will be released on Monday September 22, 2014 at the National Quartet Convention in Pigeon Forge, Tennessee.

The “Gospel Music Hymn Sing” was recorded on July 7th, 2014 at First Baptist Church in Morristown, Tennessee, in full 1080p High-Definition and 5.1 Surround-Sound audio. The recording features 30 Hymns and Gospel Classics, sung by 1,400 voices, including 46 well-known Gospel Artists and a 100-voice Choir, accompanied by a live band.

Gerald Wolfe, Producer of the “Gospel Music Hymn Sing,” said “We wanted to give the viewer the experience of being in the audience, when they watch the video. A BluRay Disc is currently the only way to see a video in full 1080p resolution. When you include 5.1 Surround-Sound, it becomes an almost-immersive experience, and it’s the closest a person can get to “being there,” without actually being at the event.” Wolfe added, “Greater Vision was the first Gospel Artist to release a DVD, back in 1996, and we’re really excited to be a part of moving the greatest music in the world into the BluRay format.”

The video was recorded by ViewFinders, and Produced and Directed by Kim White. “When you watch the stunning, full HD video and listen to 1400 voices in 5.1 Surround Sound… I guarantee you will have to remind yourself over and over that you aren’t actually in the 2nd row! All of us at ViewFinder’s are thrilled to be a part of this Blu-Ray release!” White commented. The Live-Event was promoted by IMC Concerts, and the BluRay Disc manufacturing is being overseen by Tribute Media Source. Landon Beene, President of IMC Concerts and Tribute Media Source, said “We have the greatest musical genre in the world. I’m so honored we have the opportunity to bring the very best quality and cutting edge technology to the viewers and listeners by way of Gospel Music’s first-ever Blue-Ray Disc.” The 5.1 Surround-Sound audio was recorded and mixed by award-winning Engineer, Bob Williams.

The “Gospel Music Hymn Sing” recording will also be released on DVD and a Music CD.