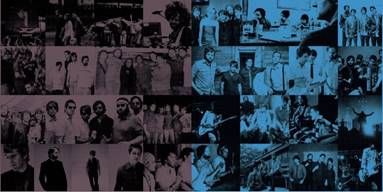 In the 20 years since Dan Haseltine, Stephen Mason, Charlie Lowell and Matthew Odmark released their debut album Frail, Jars of Clay sold millions of albums and received GRAMMY, American Music and Dove Awards and nominations, 16 No. 1 songs and major television and film song placements, while also appearing on all the major late night talk shows and entertainment magazines. During the journey, the band has always leaned forward and focused on what their next creative endeavor could be. Each new album has pushed off in a new direction from the previous one, showing a 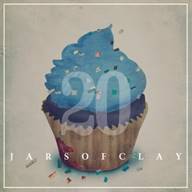 trend of transformation that has become a calling card of the band. With 20, they now have taken a moment to look back over what they’ve created.

“This has been the most extended period of time that we’ve been able to musically reflect on what we’ve done over the last twenty years,” summarizes rhythm guitarist Odmark.

Remakes of earlier songs and movies often fall short of evoking the same spark that made them popular in the first place, but Jars of Clay have discovered rich treasures hidden in previous works during their two-decade career. By allowing the fans to say which songs they would do and allowing themselves to decide how they would do them, balancing out the essence of the original version with where the band is now, the adventurous 20 ends up feeling both nostalgic and new, simultaneously looking back and facing forward.

“There is weight attached to a collection of songs that people who have spent 20 years with us have chosen. It’s sacred space,” says lead vocalist Haseltine.

A few of the fans’ selections surprised the band, not having played some of them in ten years. Many were deep-track selections that didn’t garner as much radio play but cut to the heart of fans.

“There were some songs that were surprisingly hitting a real strong emotional chord in me because I had missed them the first time around,” admits multi-instrumentalist Mason.

Many of the band’s remakes received a “sonic sprucing up” that reflects the current ethos of the band. The original version of “God Will Lift Up Your Head,” for example, now sports a punk rock energy, with jazz flavored polyrhythmic drum-and-bass grooves. Conversely, Jars of Clay’s original, acoustic driven “Love Song,” has a more relaxed, airy feel with stark piano chords and a cinematic string section.

The two new songs in this retrospective album are “If You Love Her,” which was birthed from the band’s experiences working with Blood:Water Mission, an organization they founded in 2004 that has raised more than $22 million to help fight AIDS/HIV and the water crises in Africa, and “Ghost on the Moon,” a song to “appease the unappeasable,” declares The Christian Manifesto.

In all, “20 is like connecting with an old friend, sitting on the front porch, and catching up about your loves over a cool glass of ice tea and sympathy. These pieces are long familiar, yet fresh and exciting all over again,” says The Christian Manifesto.

“20 is a beautiful collection with a meaningful look into an incredible 20 years of music-making… Jars fans, you will not want to miss this momentous collection,” adds JesusFreakHideout.com.

“For the past twenty years, Jars of Clay have consistently released great quality songs and never forsake message as they craft amazing melodies,” declares NewReleaseTuesday.com. “Every song is powerful and moving, a fitting tribute to their stellar and influential career. There is something for everyone on this brilliant and stirring collection of songs.”

“20 succeeds in getting the listener excited about Jars of Clay’s past, present and future,” says Crosswalk.com.

On tour later this month, Jars of Clay will play both old and new fan favorites spanning the band’s repertoire that includes 16 No. 1 songs. Confirmed tour dates follow:

For all the latest Jars of Clay tour news and more, go to www.jarsofclay.com, www.facebook.com/jarsofclay, @jarsofclay.