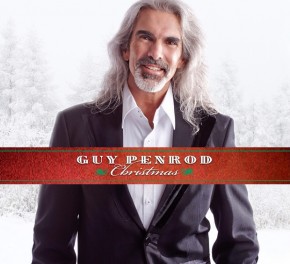 Christmas (Gaither Music Group/Servant Records) captures 15 seasonal favorites including “Tennessee Christmas,” featuring Amy Grant and Vince Gill, as well as “Twelve Days of Christmas,” which is a family affair featuring vocals from his eight children and his wife, Angie.

“At our house the Christmas season begins and ends with music. We wouldn’t think of putting up the tree or making cookies without it. We rely on music to ignite the Christmas spirit and keep it alive throughout the season,” Penrod said.

The release will air as part of a special TV offer on Dish TV, DirecTV, AT&T Uverse, GaitherTV, TBN, RFD, FamilyNet, CTN, GMTN, Guardian, Liberty, TCT and TLN. It will also air in Canada on Vision TV, CTS, The Miracle Channel and Hope TV. It is featured in HOMECOMING Magazine.

The multi-platinum selling artist is currently on tour until the end of the year. His acclaimed sophomore release Hymns (Gaither Music Group/Servant Records), debuted at #1 on the Nielsen SoundScan Southern Gospel retail chart, became the top-selling southern gospel album of 2012 and was also one of the year’s top-selling gospel recordings in Cracker Barrel Old Country Store® nationwide.

Christmas is distributed by Capitol Christian Distribution and is available at retail and digital outlets worldwide including iTunes, Amazon, www.gaither.com, and www.guypenrod.com.

ABOUT GUY PENROD
One of the most popular artists featured on the Gaither Homecoming Video Series, Penrod spent 14 years as the lead singer of the Gaither Vocal Band before launching a successful solo ministry with combined career sales now in excess of four million units.

One of the most in-demand touring artists in Christian music and a vocal powerhouse, Penrod travels throughout the US and abroad. He has made multiple media appearances including radio’s “The Mike Huckabee Show,” RFD TV’s top-rated “Larry’s Country Diner” and one of North America’s most popular Christian television programs “100 Huntley Street.” Additionally, Penrod hosts DayStar Television’s Emmy Award-winning “Gospel Music Showcase” program.