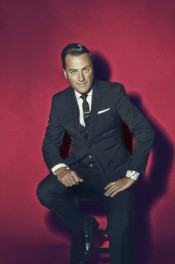 On National Philanthropy Day – November 5 – the Nashville Chapter of AFP named Smith Philanthropist of the Year based on his extensive work with Rocketown, which he founded in 1994. The first of its kind in the Southeast, Rocketown over the years has grown into a model example for Christian-based relational outreach programs across the country. Following the tragedy of Columbine in 1999, Rocketown’s board was inspired to grow the scope of programming and move to a central location in downtown Nashville. The current facility touts three stages for live entertainment, Middle Tennessee’s only indoor skatepark, The Hub snack bar, a recording studio and photography, art and dance studios. More than 800 teens from across the Middle Tennessee 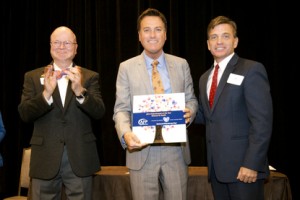 The 2014 Honorees were chosen by the NATD Board of Directors, under the leadership of President Steve Tolman of LogiCom. “Our honorees are from varying entertainment backgrounds and professions, and they have each brought their expertise, their commitment and their vision to ensure that Music City continues to flourish and grow,” Tolman said.

Smith is gearing up to launch the “The Spirit of Christmas Tour” in support of Michael W. Smith & Friends: The Spirit of Christmas, which features a plethora of A-list guests – including Vince Gill, Lady Antebellum, Little Big Town, Martina McBride, Amy Grant, Carrie Underwood, Jennifer Nettles, Bono and Michael McDonald.

The tour will kick off November 30 and will hit several cities in the U.S. and Canada. Partnering with Smith as the official tour sponsor is Cracker Barrel Old Country Store® and joining him on all tour dates is Dove Award-winner Rachael Lampa. In addition to “The Spirit of Christmas Tour,” Smith will co-headline three special events with long-time friend and fellow GRAMMY® winner Amy Grant. Teaming up in Dallas, Minneapolis and Atlanta, Smith and Grant will showcase their beloved Christmas set while performing alongside the full Symphony Orchestras.

Smith will also perform on the CMA Country Christmas special to air on ABC on Monday, December 1 at 8/7c. Smith will perform two tracks off of the album, his original song “All Is Well” with Carrie Underwood, and the beloved Christmas classic “Silent Night” with Little Big Town. For more information, visit cmaworld.com/cma-country-christmas.

Photo: Michael W. Smith is presented with Philanthropist of the Year Award by the AFP