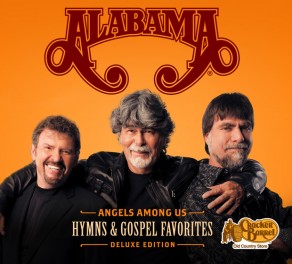 “Alabama’s music is timeless, and a perfect fit for Cracker Barrel,” said Cracker Barrel Marketing Manager Julie Craig. “We know our guests will enjoy hearing their versions of these classic gospel songs.”

“We know our fans enjoy eating at Cracker Barrel, just like we do,” said all three Alabama members Jeff Cook, Teddy Gentry and Randy Owen. “We are excited to be able to have our new gospel album available where so many of our fans eat after church on Sunday.”

The 15 songs featured on Angels Among Us: Hymns & Gospel Favorites: Deluxe Edition (including the title cut, a classic Alabama hit from the early ‘90s) are as follows:
“I Saw The Light”
“Because He Lives”
“Just A Closer Walk With Thee”
“Knights Of Molite”
“What A Friend We Have In Jesus”
“Church In The Wildwood”
“The Old Rugged Cross”
“Raising Alabama”
“Jordan’s Banks”
“Let’s All Go Down To The River”
“Lift Me Up”
“Angels Among Us”
“The Last Altar Call”
“Oh, The Lord Has Been Good To Me”
“I’ll Fly Away”

About Alabama
Alabama has sold more than 75 million albums and singles, achieved 43 No. 1 songs, received a star on the Hollywood Walk of Fame and was inducted into the Country Music Hall of Fame. The group has received two GRAMMY Awards for Best Country Performance by a Duo or Group with Vocal (1982-1983); 20 American Music Awards, including 17 Favorite Country Band/Duo Awards (1982-1995, 1997-1998, 2003); nine CMA Awards, including three consecutive Entertainer of the Year Awards (1982-1984); and 17 ACM Awards, including five consecutive Entertainer of the Year Awards (1981-1985). In addition, the band has received three special ACM Awards: Artist of the Decade (1988), The Cliffie Stone Pioneer Award (2002) and 40th Anniversary Milestone Award (2005). For more information on Alabama, visit theAlabamaband.com.