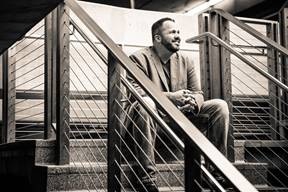 Kansas City, Missouri-based worship leader and songwriter Dustin Smith releases his anticipated sophomore album, COMING ALIVE, internationally Sept. 23 through Integrity Music. Recorded live at World Revival Church in Kansas City in May, COMING ALIVE is a 12-song, passionate expression of revival seekers singing in response to an extraordinary move of God at the church. What began as “the cornfield revival” of Smithton, Missouri in the 90s has grown into a vibrant KC-based congregation that is a magnet for people hungry to experience God’s presence in tangible ways.

Co-produced by Dustin and Kyle Lee (Michael W Smith, Leeland), COMING ALIVE features songs co-written with Michael W. Smith, Stu G, Ed Cash, Michael Farren (Pocket Full of Rocks), Jack Mooring (Leeland) and others. Not unlike the earliest days of Jesus Culture, the live corporate expression heard through the songs on the new album is as organic as it is worshipful.

“We’re not writing songs to make better church services,” says Dustin. “I couldn’t care less about that. We’re not interested in chasing radio. It’s the heart of God we’re chasing. There really is a generation that is seeking something real, something raw and not super polished, something that meets them in their desperate seasons, gives voice to their brokenness and reminds them that God is right there in it with them.”

The COMING ALIVE title track, written with Stu G, is simultaneously a prophesy over the congregation and a call to worship. “I love where this song takes us,” Dustin says of the driving anthem. “Because of what He has done in our lives, we are ‘coming alive.’ Essentially, we are the fulfillment of the song.”

“Home,” one of the seminal songs on the record written with James Galbraith and Farren, speaks of the dichotomy of God’s presence—the fear, the conviction, the longing and the embrace. “Sometimes it looks different than we think it should,” Dustin says. “It’s not a place we can control. Like the lyric says, ‘It doesn’t feel safe here, but it’s always good…’”

Also featured on COMING ALIVE is “Extravagant Love,” which was co-written with Farren and Mooring and first released April 29 of this year as a deluxe single with lyrics video, companion song study devotional penned by Dustin and a bonus track, the radio edit of Smith’s song “Rushing Waters.”

Co-written with Ed Cash, “We Want To Know You,” is one of several tracks that Dustin says are “presence-driven” songs. “The first line begins, ‘Take us into a place where angels stand amazed and every voice knows who you are,’ and from there, Dustin says, “You can almost hear our entry into the presence of God, all together.”

In addition to the physical CD, the Digital Deluxe version of COMING ALIVE will include bonus video from the live recording, as well as Dustin’s “You Are The Fire,” which will also be featured on the digital-only release of the album.

About Dustin Smith:
Dustin’s pursuit of worship has never been for commercial success, but as a witness to the life-giving power of God among people. The son and grandson of pastors, Smith has been involved in fulltime ministry for 17 years, including the past nine years serving as a worship leader at World Revival Church. His acclaimed Integrity Music debut, Rushing Waters, was released in 2013 and followed Dustin’s own independent recordings. Having written songs like “Rushing Waters,” “Yahweh” and “Reign Over Me,” and having his songs recorded by Michael W. Smith, Aaron Shust and a variety of other artists, he has also authored several teaching resources and served as a facilitator on songwriting related topics for AllAboutWorship.com. Touring recently in the US, Australia, New Zealand, Canada, Poland and Amsterdam, Dustin Smith is also a husband and father of three young children. Additional information is available at http://www.dustinsmith.com.

About Integrity Music:
Integrity Music is part of the David C Cook family, a nonprofit global resource provider serving the Church with life-transforming materials. Headquartered in Colorado Springs, Colorado, Integrity is committed to taking songs of substance to the local church and its leaders around the world. Additional information can be found at www.integritymusic.com.