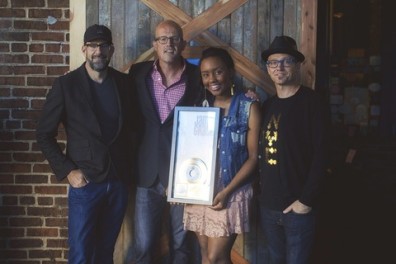 Nashville, Tenn. (June 16, 2014) – GRAMMY®-nominee Jamie Grace is celebrating a number of achievements so far this year, furthering her status as one of the most successful young artists in the industry. Just last week, Jamie Grace’s No. 1 single “Hold Me (feat. TobyMac)” celebrated 500,000 singles downloaded, earning an RIAA Digital Gold certification. At the age of only 22, the achievement launches Jamie into a league of only four female Christian artists to have sold more than half a million singles.

Last week, Jamie Grace was featured on the “Power of She” segment on HLN’s Morning Express with Robin Meade. As a part of Tourette Syndrome Awareness Month, which runs from May 15 – June 15, Jamie Grace shared about her ongoing battle with Tourette syndrome, her work with her non-profit foundation ImAFighter.org, as well the explosion of her musical career after she was discovered on YouTube by TobyMac.

Jamie Grace’s latest album Ready To Fly released earlier this year and was declared the “real deal” by Sherri Shepherd, co-host of ABC’s The View, and a “coming of age record…preparing to do life cranked all the way up to eleven.” Her second single from the album, “Do Life Big,” is living up to its own name, breaking into the Top 10 on the Hot AC/CHR chart and Top 20 on the Christian AC chart this week.

Earlier this month, Jamie Grace became the First Christian Artist to Appear on a 7UP Can at the K-LOVE Fan Awards. The award was completely voted upon by fans and was awarded to Jamie Grace in person by Pepsi MidAmerica President Lee Crisp. Beginning in September, Jamie Grace will appear on four million 7UP cans throughout the Midwest. Additionally, consumers will be able to download a free song by Jamie Grace with a promo code on their can.

About Jamie Grace:
22-year old singer-songwriter Jamie Grace made a remarkable entrance with the help of multiple GRAMMY® winner TobyMac who signed her to Gotee Records. During the time of the release of her debut project, One Song at a Time, Jamie balanced her time between her career as a touring artist and college. While her album propelled her to win her first GMA Dove Award for New Artist of the Year and receive her first GRAMMY® and Billboard Music Award nominations, she also performed on the Women of Faith’s REVOLVE tour, TobyMac’s HITS Deep Tour and the highly attended 44-city Winter Jam Tour Spectacular. Hailing from outside of Atlanta, she was diagnosed with Tourette Syndrome at age 11 and has since traveled the country sharing her story and faith through music and speaking. Jamie Grace has since graduated from Point University with a degree in children’s ministry. Her sophomore album Ready To Fly is available now.

About Gotee Records:
In 1992 a production team of three talented guys with diverse tastes shared a love for music. Producers Joey Elwood and Todd Collins, along with Grammy-winning artist TobyMac, launched Gotee Records in 1994 after unsuccessfully finding a label deal for the R&B trio Out of Eden. With a steady focus on artistry, the new label expanded to reflect the diverse interests of its founders. Within 12 months, Christafari, GRITS, and Johnny Q. Public were signed, easily representing four different music categories: R&B, reggae, rap and rock. In the 20 years since Gotee’s founding as a record label, it has launched the careers of Relient K, Jennifer Knapp, Sonicflood and more recently, Jamie Grace, Capital Kings, Finding Favour and Ryan Stevenson. The present day in the Gotee story is much like the label’s early days. Through all the changes in a tumultuous music industry, the boutique label’s independent spirit is maintained through a steady focus on artist development and diversity.