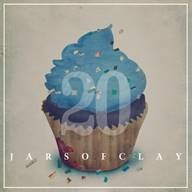 To celebrate 20 years together as a band, Jars of Clay has taken 2014 to throw themselves a yearlong birthday party. Not only have they spent the year performing a series of online Stageit concerts commemorating their previous albums, but they have also crafted a uniquely special, fan-curated retrospective double album of re-recorded favorites appropriately titled 20.

As the band reflected on their previous twenty years, they wanted to mark the milestone in a way that seemed true to the spirit they had cultivated within their first two decades. During one of their early online Stageit concerts, Jars of Clay multi-instrumentalist Stephen Mason noticed, “There were some songs that were surprisingly hitting a really strong emotional chord in me because I had missed them the first time around.” It is this second-time-around sentiment that sparked the initial idea for 20. Not wanting to just compile their own favorite songs for an uninspired greatest hits package, the band looked for an opportunity to once again serve and thank their fans in a genuine, tangible way. They decided on the retrospective re-recording approach and as keyboardist Charlie Lowell explains, “We wanted to really honor the fans by letting them choose the songs.” By allowing the fans to say which songs they would do and allowing themselves to decide how they would do them, the adventurous 20 ends up feeling both nostalgic and now, simultaneously looking back and facing forward. 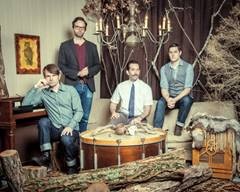 for 20 has allowed the band a unique opportunity to take a fresh look at themselves and their body of work: “There are so many different economies when looking at a record. We started young and the first economy presented to us was ‘Is it selling records?’ This project has given us the opportunity to go back and listen to some of these songs in a brand new way, not having to just think about that first financial economy.” Jars of Clay has always been a band that has leaned forward and focused on what their next creative endeavor could be. Each new album has pushed off in a new direction from the previous one, showing a trend of transformation that has become a calling card of the band. With 20, they now have taken a moment to actually look back over what they’ve created. As rhythm guitarist Matt Odmark summarizes, “This has been the most extended period of time that we’ve been able to musically reflect on what we’ve done over the last twenty years.”

That fact that it has taken them 20 years to finally pause and reflect for a moment is quite understandable when you look at what all they’ve been able to accomplish during that timeframe. Their debut album Jars of Clay made a unique dual-market splash when it was released in the fall of 1995. With five singles landing in the Top 5 on Christian radio and their smash hit “Flood” making waves on mainstream radio and MTV, Jars of Clay went on to sell over two million records and earned the band their first Grammy Award nomination for Best Rock Gospel Album. Their eclectic sophomore follow-up album Much Afraid also went platinum and won the band their first Grammy Award for Best Pop/Contemporary Gospel Album, a feat that would be repeated with their next two albums, If I Left the Zoo and The Eleventh Hour. While the next season of the band was marked with a sonic shift into roots, blues, and gospel music for the well-received albums Who We Are Instead and Redemption Songs, it was 2006’s Good Monsters that garnered Jars of Clay the highest level of critical acclaim that they had experienced since their self-titled debut. They received six nominations at that year’s Dove Awards and they ended up winning for Rock/Contemporary Album of the Year and Short Form Music Video of the Year. Their next album, The Long Fall Back to Earth, also found the band with a busy awards season as they received six Dove Award nominations and a Grammy Award nomination for Best Pop/Contemporary Gospel Album. In 2013, the band left the friendly confines of their hometown studio in Nashville and traveled to Portland, OR to work with producer Tucker Martine (My Morning Jacket, The Decemberists). The result was Inland, an ambitious album of introspection and exploration that debuted at #2 on the Billboard Christian Albums chart and #70 on the Billboard 200. Overall, Jars of Clay has released 12 full-length studio albums, over 40 songs to radio, and a substantial grouping of EPs and fan-club releases.

With such a rich catalog full of radio hits and song placements in well-known movies and television shows, it would be easy to chart out what a Jars of Clay career retrospective might look like from the industry side of things. However, by allowing the fans to have their say and vote for the tracklisting, the band was able to see which songs ended up being the most connective and meaningful apart from all of the inner workings of the music business machine. Many of the fan’s selections even surprised the band as they hadn’t played some of the songs in 10 years or more. However, it was those non-radio album cuts and deep track selections that allowed the band to see just how much weight these songs held with their fans. As they re-recorded the songs to “regift” back to their fans, Mason details that it felt, “maybe more sincere on some levels than it initially was the first time around.”

That new awareness of sincerity and significance is displayed throughout the entirety of 20, as each song balances out the essence of the original version with the ethos of who the band is now. Each song has been brought forward with a sonic sprucing that captures the current snapshot of the band. There are even some drastically altered adaptations ready to surprise and delight listeners. Compare the original version of “God Will Lift Up Your Head” from Redemption Songs with its 20 revamp and you’ll find an already-amped-up song taken into new territories of punk rock energy, tempo shifted atmospherics, and jazz-flavored poly-rhythmic drum-and-bass grooves. Embodying the other side of the musical metamorphosis coin is the beautifully broken down “Love Song for a Savior.” Originally an acoustic-driven folk-pop song from their self-titled debut, the 20 version showcases a relaxed confidence that allows the song to breathe and float over sparse piano chords and a cinematic string section. Another nod to the past that is present on 20 is the return of a couple special guest vocalists. Reprising their roles for a second time around are singer-songwriter Ashley Cleveland on “Jealous Kind” (originally on Who We Are Instead) and Mancy Pendergrass on “Worlds Apart” (originally on Jars of Clay), a certain treat for long-time fans of their self-titled debut.

Alongside the twenty years worth of refreshed fan favorites on 20 are two brand new songs as well. “If You Love Her” was birthed from the band’s experiences working with Blood:Water Mission, the organization they founded in 2004 that has raised over $22 million dollars to help fight against the HIV/AIDS and water crises in Africa. “Ghost in the Moon” is a hauntingly beautiful song of melancholy melodies that eloquently embodies the idea of hearing Jars of Clay like you’ve never heard them before. By placing these two new songs together with the 18 other re-recorded fan favorites, Jars of Clay has managed to both continue the conversation they started 20 years ago and keep it moving forward as well. As Haseltine sees it, “There is weight attached to a collection of songs that people who have spent 20 years with us have chosen. It’s sacred space.” 20 not only gives context to that sacred space, but it provides the perfect soundtrack to one well-deserved birthday party as well.