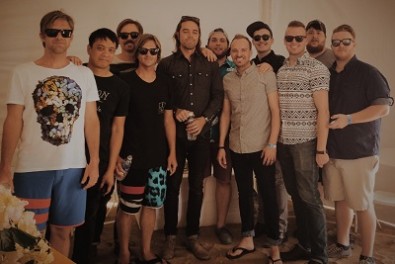 NASHVILLE, Tenn. (May 19, 2014) – Singer/songwriter Jason Bare, who is touring in support of his new CD, Love Is Alive, recently performed at the SonRise Music Festival in Virginia Beach, Va.

Bare shared the main stage with event headliners Sonicflood and Switchfoot. Francesca Battistelli, KJ-52, Silverline and Chris August were among the Christian artists who performed during the three-day festival, which attracted more than 5,000 attendees and included a sunrise Mother’s Day service.

“Performing right on the beach at the SonRise Music Festival was a blast, and it was an honor to share the stage with such incredible artists,” Bare says. “I was thrilled to be a part of the event and see so many people touched by the presence of God at this giant Praise Fest!”  For more information about Bare and Love Is Alive, visit jasonbare.com, or  follow him on Facebook (facebook.com/jasonbaremusic) or Twitter (@jasonbaremusic).

After spending a lifetime growing up in church as a preacher’s kid, attending Lee University and traveling as part of the Lee Singers, Bare has spent the past 15 years leading congregations in praise and worship, most recently at Kingdom Life Ministries in Virginia, while also writing and singing his original music.

In December 2010, his debut radio single, the nationally-released Christmas song, “For The First Time,” hit No. 1. In 2011, he released his debut CD, Beautiful Design, and his Christmas EP, Have You Heard. In December 2011, the title track from Have You Heard peaked at No. 5 on the Christian Music Weekly Inspirational chart and No. 16 on Billboard’s Soft AC/Inspirational National Airplay chart.

During the last few years, Bare has appeared on television networks including TBN, JCTV and CTN, premiered his first music video for “You Found Me” and toured throughout the United States and South Africa.

About Love Is Alive:

A number of Christian music industry veterans partnered with Bare on Love Is Alive, the third studio album from the singer/songwriter/worship leader, which released digitally February 25, 2014. Love Is  Alive currently available at all online retailers, including iTunes, Amazon and CDBaby, with a brick and mortar release set to follow.

Luke Buishas and Aaron Rice, whose songwriter credits include such superstars as Mandisa, TobyMac and Rachel Lampa, served as producers. While Bare co-wrote every song on the project, he was joined by a number of acclaimed songwriters, including Jennie Lee Riddle (“Revelation Song”), Jason Dyba, Brandon Collins, Brian Campbell, Buishas and Rice, who was nominated for a Grammy for TobyMac’s “Made To Love.”

A worship leader at heart, Bare kicks off his new CD with “God of All,” a shimmering anthem of adoration. “We lift our hands to sing your praise. We lift our voice to shout your name,” Bare exults. “God of All, consuming one of blazing love. God of All, eternal king of majesty!”

“‘God of All’ is by far one of my favorite songs on the album,” Bare confesses. “It is clearly our innermost worshiper crying out to the most-high God, and I think it was a turning point for this record.”

Bare pulls back to a more intimate mode on the confessional, acoustic guitar-driven “More Than Enough,” then segues seamlessly into the equally confessional, “When I’m Found In You.” He maintains that same sense of intimate worship on “Lamb of God,” while at the same time inviting listeners to join in corporate worship. Bare shifts effortlessly from worship to praise and adoration on the quietly potent, “Let It Be Praise.” The title track, “Love is Alive,” invokes a swaying, Latin rhythm, complete with stunning Spanish guitar riffs and guest vocals by the remarkable Jeannie Ortega.

Bare shares songwriter credits with producers Buishas and Rice on the uplifting pop number, “Bigger,” which extols the fact that God is bigger than any problem life can throw at us. Bare’s emotive vocals take center stage on the peace-filled, soul-baring, “He Took My Place.” Bare continues to exult in the unfathomable attributes of God on the anthemic “Everlasting God” and on the piano-driven “Miracle Maker,” where he is joined by guest vocalist Jennifer McGill.

An independent artist, Bare has joined a growing list of musicians including Shaun Groves, Thousand Foot Krutch, John Schlitt and Cheri Keaggy who all funded their most recent CDs through Kickstarter. The innovative crowd-funding program only works if the artist’s predetermined goal is achieved. If the goal is not met by the Kickstarter deadline, no money is collected from supporters and the project is not funded. Bare’s supporters put his Kickstarter campaign over the top in July 2013.