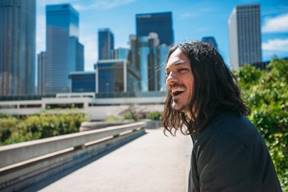 Jesus Culture Music, known as one of the most influential youth and young adult movements around the world, releases the full-length debut album from Justin Jarvis, Atmospheres (Live), internationally at digital and physical retailers everywhere Sept. 30 through Fuel Music. Featuring over 60-minutes of music, the album was recorded live on tour with Jesus Culture band in March 2014 and captures 10 original anthems.

With both subtle and massive arrangements hinting at inspiration from rock greats like Coldplay and The Killers, Atmospheres (Live) speaks to the shifting of atmospheres that takes place in us and through us every day because of the love of Jesus and the power of the Holy Spirit. “Our mandate is to shift the atmosphere with the love of Jesus in our cities and the nations,” explains Banning Liebscher, Director of Jesus Culture. “As we lift up our voice in worship the reality of Heaven is released in our midst.”

From the soaring title track, “Atmospheres,” and the epic instrumentation of the modern hymn, “Heaven’s Light,” to the intimate reflection of “Born of God,” every song at its core is written in and for the local church, inspiring a journey into the fullness of God’s heart. “This live album embodies the heart and hunger for God’s presence through deep lyrics and passionate expression,” says Kim Walker-Smith, President of Jesus Culture Music, as other well-known worship leaders laud the music:

“I don’t have many favorites out there, but Justin is definitely is one of them!” says Leeland Mooring. “His music is creatively impactful and anointed! And Atmospheres has taken it to a new level! I believe this music will change the atmospheres of cities and cultures everywhere!”

“Justin is a powerful and unique voice in the world of worship music,” says John Mark McMillan. “His songs are warm, lush with hymn-like importance.”

“I will never forget the first time I heard Justin Jarvis,” adds Jonathan David Helser. “My heart was impacted in such a deep way. His songs ring out with such creativity and raw passionate beauty.”

Marked with a passion for Jesus, Jarvis is a worshiper and songwriter that carries a unique sound born in and for the local church. Be it soaring anthems or intimate reflections, his distinct voice delivers an authenticity that opens the heart, while his music inspires with an edge that is refreshing in modern day worship. His songs are characterized by theological depth that draws inspiration from the love and power of God, carrying the signature of revival.

For over ten years, Jarvis has overseen the music and creative culture of The Harbour Church in Fort Lauderdale, FL. In 2004, he married his college sweetheart, Janette, and they have three children: Owen, Elliot and Emma. From his family to his music, Justin desires to see this generation impacted in a life-changing way by God’s presence. For more information, go to www.justinjarvis.com and www.jesusculture.com.

About Jesus Culture Music:
Sacramento, CA-based Jesus Culture, directed by Banning Liebscher, is a ministry mobilizing a generation of revivalists and reformers who will shape culture and transform nations. It was formed organically through the momentum of a movement whose focus is to equip a generation to transform society by bringing people into an encounter with God’s love through worship and discipleship. Jesus Culture Music albums capture the heart of this movement. To date, the Jesus Culture band has recorded ten albums and released a total of 21 projects on their music label, including Jesus Culture Unstoppable Love. Additional information on Jesus Culture music and events can be found at www.jesusculture.com.

About Fuel Music:
Fuel Music & Management, LLC, is one of the leading independent distributors of music, CD’s, tapes and vinyl records internationally and enjoys a growing base in artist merchandise sales. Based in Tennessee, the Fuel team brings nearly 50 years of combined music industry experience in record label operations (Furious? Records), record distribution and marketing (EMI Label Group), and artist management for artists ranging from upstart bands to Dove and GRAMMY Award nominated, multi-platinum artists. More information on the company can be found at www.thefuelmusic.com.