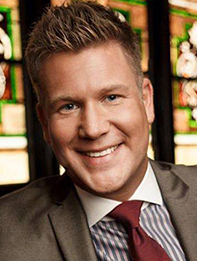 Joseph Habedank will be the featured guest coming up on the next two broadcasts of Daniel Britt & Friends on the Enlighten Channel on Sirius XM channel 65. For the weeks of 9/15/14 & 9/22/14, the popular Sirius XM radio show will welcome Habedank to discuss his new project Welcome Home!

On the next two shows, Daniel sits down with Joseph to listen to the new songs, as well as some classic moments from Joseph during his time with The Perrys. Conversation ranges from songwriting technique, to daily morning routines, to Joseph’s experience of grace following a period of prescription drug addiction and rehab. Don’t miss Joseph Habedank and Welcome Home, on the next two broadcasts of Daniel Britt & Friends!

enLighten (Sirius XM Channel 65) – Mondays at 7PM ET, Thursdays at 10PM ET, and Saturdays at 12 Noon ET. You can also catch the show online at siriusxm.com, Smartphone devices, or with Dish Network on channel 6065. After the broadcast, you can download the extended interview from www.danielbritt.com. Connect on Twitter @BrittAndFriends and on Facebook at facebook.com/BrittAndFriends

About SIRIUS XM Radio
Sirius XM Radio Inc. is the world’s largest radio broadcaster measured by revenue and has 24.4 million subscribers. SiriusXM creates and broadcasts commercial-free music; premier sports talk and live events; comedy; news; exclusive talk and entertainment; and the most comprehensive Latin music, sports and talk programming in radio. SiriusXM is available in vehicles from every major car company in the U.S., from retailers nationwide, and online at siriusxm.com. SiriusXM programming is also available through the SiriusXM Internet Radio App for Android, Apple, and BlackBerry smartphones and other connected devices. SiriusXM also holds a minority interest in SiriusXM Canada which has more than 2 million subscribers.

*Through its partnership with Dish Network, SIRIUS XM Radio programming is available to nearly 40 million satellite subscribers in the U.S. & Canada.