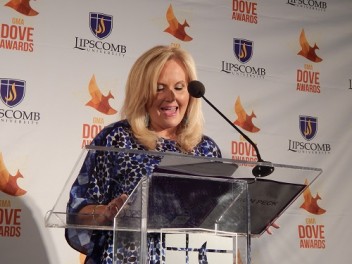 “Revival” has been a huge success this year for not only the group, but also for the three writers of the song, namely Kenna Turner West, Karen Peck Gooch and Don Poythress. Placing number one in just about every Southern Gospel Chart in the industry.

“We are so excited for all of our artists. Many of them received Dove nominations for their latest recordings. Karen Peck and New River continue to set the bar higher with each release. They are becoming one of the most recognized artists in all of Christian music.” Ed Leonard of Daywind Records commented.

Karen stated “We are deeply humbled and incredibly grateful for the GMA Dove nominations.
We put so much time and prayer in choosing the right songs for ‘Revival’. I am also blessed to have had the opportunity to co-write, along with Kenna West and Don Poythress, the nominated song, “Revival”.
Susan, Jeff, and I pray that The Lord will continue to bless and encourage people through the songs on this special album. We are loving this season in our ministry.”

Rick Shelton of Daywind Publishing added “Over a long career, Karen Peck has garnered many awards for her singing. We at Daywind Publishing couldn’t be more thrilled that she is now receiving accolades for not only her incredible vocal talent but also her compelling songwriting from the Gospel Music Association with four recent Dove Award nominations. Karen is the real deal with a real heart for people. She is also a real delight to work with. We are so very thankful to be on this ministry journey with her.”

Karen and Kenna West also enjoyed a Number One party for their song “Finish Well” after the big festivities of the Dove Nominations.