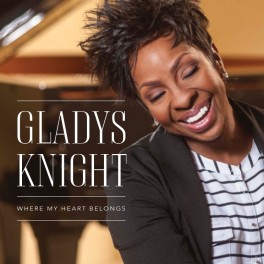 (Las Vegas, NV) – July 16, 2014 – Seven-time GRAMMY Award winner Gladys Knight connects to her gospel roots with her upcoming album Where My Heart Belongs. Releasing on September 9th on Shadow Mountain Records for Deseret Book, Where My Heart Belongs finds Knight once again returning to gospel music to share her faith, inspire listeners, and testify to God’s goodness throughout her personal life and career.

Georgia-born Gladys Knight is no stranger to gospel music. The beginnings of her multi-decade, illustrious career began within the stained glass windows of the church. From an early age she sang in the church choir. She attributes her mother’s faith to her initial encounter and connection between Christ and music.

“My mother reassured me at a young age that my music was a gift from God Himself and that I am to share it freely for His glory,” says Knight. “My faith was formed because of her and throughout this journey of life, my faith has strengthened because I know that Jesus covers me through it all.”

Knight is eager to share her testimony and gospel message with her fans through the new CD. She hopes that the music and message will inspire and ignite an encounter with Christ that she knows firsthand has the power to change lives forever.

Throughout the eleven tracks on Where My Heart Belongs, Knight delivers one inspirational performance after another. Tracks like “Life Song”, with a cleverly-crafted mix of traditional and contemporary music, remind the listener that the Lord is always there.

Fans of this icon will enjoy the beautifully-executed “Always”, perfect for Sunday morning praise teams and for intimate times of personal worship with God. Those with heavy hearts will lift their heads with the emotive song, “Just Look Up” and the God-directed musical prayer, “I Need You”. Other memorable tracks include “Right In The Midst Of The Rain”, “There Is A Green Hill Far Away” and “Were You There?”

“My desire for this album is to motivate and serve as an introduction to Christ,” Knight says. “I vividly remember the time in my life when I felt lost, as if something was missing. I was desperately seeking answers and when I finally found the answer, I learned that it was Jesus Christ. He gave me this gift and out of obedience, I want to give Him back to the listeners.”

In 1997, Knight became a member of The Church of Jesus Christ of Latter-day Saints after the influence of her late son Jimmy Newman. She has worked fervently with the Saints United Voices Choir recording several albums. Their first album, One Voice, earned her a GRAMMY Award for Best Gospel Choir or Chorus Album. She has also partnered with greats such as the late Ray Charles on his album Genius Loves Company. The duo won a GRAMMY Award for Best Gospel Performance for their duet “Heaven Help Us All.”

The award-winning singer, actress, author, restaurateur, and spokeswoman has recorded more than 40 albums, won seven GRAMMYs, and enjoyed several #1 hits on the Pop, Gospel, R&B, and Contemporary charts, including the famous Gladys Knight & the Pips’ song “Midnight Train to Georgia”. Knight has been honored by the Rock ‘n’ Roll Hall of Fame, has a star on the Hollywood Walk of Fame, and has dozens of TV, film, and theatre credits.