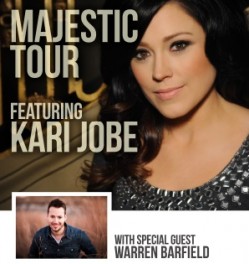 (NASHVILLE, TN.) Leading worship is Kari Jobe’s heart’s desire. Making His name known is the focus of her latest worship album Majestic and The Majestic Tour 2014.

Following an impact-driven Spring tour and international “Nights of Worship” summertime concerts, Kari Jobe is not slowing down. She and special guest Warren Barfield are embarking on the 20-concert Fall leg of The Majestic Tour, which will feature songs from her recently released Majestic and will showcase what Jobe does so giftedly and gracefully – lead others into a unique worship experience.

Tickets are available at www.PremierProductions.com

Jobe’s album was recorded live at the historic Majestic Theatre in her hometown of Dallas, Texas and features her upcoming new single “Forever.” In addition to the release of Majestic, she released her first-ever full-length live concert DVD. This DVD is also a part of the physical deluxe edition of Majestic featuring bonus songs in addition to the full concert footage.

“I am so excited about my new album Majestic,” shares Kari Jobe. “My passion in life is to lead worship and help people to connect to the presence of God. Worship changes the atmosphere of our lives and makes us more aware of His presence at work in and through us. I cannot wait for people to connect with these new songs and fill the earth with more worship to our Majestic King.”

Majestic co-writers include Chris Tomlin, Matt Redman, Reuben Morgan, Brian Johnson, Jason Ingram, Paul Baloche, along with her band mates and a few others. These songs are new anthems of worship and very congregational.

“I wrote for this album for a solid two years and was able to co-write with some friends who absolutely have a heart to write for Church,” states Jobe. “I am very excited for these new songs. And I am really looking forward to the Majestic tour with Warren Barfield. We are going to just have a crazy good time in God’s presence and worshipping Him together.”

Majestic follows the breakout sophomore album Where I Find You, which earned Jobe her first GRAMMY nomination. The project released with chart topping street week numbers at No. 1 and No. 10 on Billboard’s National Christian, Gospel and Top 200 Charts. The radio singles “We Are” and “Steady My Heart” saw much success at AC Monitored and Indicator charts as well as the National Christian Audience chart. The album also received much praise from a wide range of media outlets from Worship Leader to New York Times.

About Kari Jobe:
After being established as one of the premier worship leaders with her Dove Award-winning, self-titled debut, Kari Jobe released her highly anticipated follow-up album, Where I Find You, on Sparrow Records. She has toured on the largely popular Winter Jam Tour Spectacular, Chris Tomlin’s “Burning Lights” tour, the Hillsong Conferences (Sydney and London), Passion Conference, Women of Faith events as well as headlined her own tours in 2012 with special guests All Sons & Daughters and Warren Barfield. Jobe also released The Acoustic Sessions and Where I Find You Christmas Edition digitally in 2012. She was also a part of special projects such as the award-winning Passion: Let the Future Begin (“Revelation Song”) and My Hope: Songs Inspired by the Message and Mission of Billy Graham. (“The Cross is My Confession”).

About Warren Barfield:
At eighteen Warren Barfield used his dorm room as an office and booked one year of concerts. With his parents’ blessing he loaded his 1995, 4-cylinder, mint green Mustang with a suitcase and a guitar and took his songs on the road. After more than 600 “gigs” and 200,000 miles, Warren found himself in Nashville, TN signing his first record deal. Since his arrival in Nashville, he has released three records, had five songs top the Christian charts, received two Dove nominations, worked with legendary producers including Brown Bannister, Mark Hammond, Marshall Altman, Charlie Peacock, and Mark Miller. He’s shared the stage with the best of CCM artists from Steven Curtis Chapman and Third Day to Toby Mac. He wrote and recorded “Love is Not a Fight” which was the theme song for the #1 indie film FIREPROOF. He shares his songs and stories with thousands every year as he tours the country. Warren currently lives in Nashville, TN with his wife Megan, their son Montgomery and their daughter Ada Beth. Warren’s description of his journey goes like this, “I have seen every dream I had as a fifteen year old in Spivey’s Corner, NC come true.”