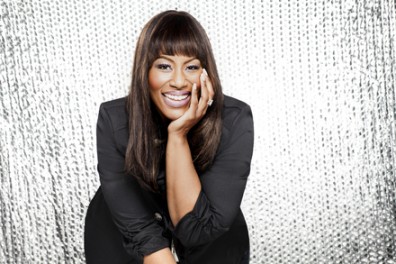 Nashville, Tenn. (August 15, 2014) – Mandisa received five nominations for the 45th Annual GMA Dove Awards, including Artist of the Year, earning the most artist nominations along with Hillsong United, Lecrae and Matt Maher. The list of nominees was announced yesterday by special guests at Lipscomb University in Nashville.
Along with Artist of the Year, Mandisa was nominated for Pop/Contemporary Album of the Year for her most recent project Overcomer as well as Song of the Year, Contemporary Christian Performance of the Year and Short Form Video of the Year for smash hit “Overcomer,” which held the No. 1 spot for twelve weeks on the National Christian Audience Chart.

The 45th Annual Dove Awards will be held at Lipsomb University’s Allen Arena October 7 and will air globally on the Trinity Broadcasting Network.
Next month, Mandisa will release her first full remix album, Get Up: The Remixes, set to debut September 16. The album will feature remixes of her biggest hits including “Overcomer,” “Stronger” and “Good Morning,” all three of which Mandisa has performed on ABC’s Good Morning America.
The 11-track album puts an upbeat spin on Mandisa’s hits, encouraging fans to Get Up and move, whether they want to dance and exercise to the album or just need a little extra motivation to face the day. Get Up: The Remixes follows the success of Mandisa’s best-selling and critically acclaimed album Overcomer which debuted at No. 1 on the Billboard Christian Albums Chart.
This fall, Mandisa will join Casting Crowns and Sidewalk Prophets in September for 39 stops across the country on the Thrive Tour, along with performances at various events with Third Day, Steven Curtis Chapman and Hillsong United. Visit Mandisa’s tour page for updated information and dates.

About Mandisa
With more than 1 million records sold, GRAMMY winner and and American Idol Season 5 finalist Mandisa is a voice of encouragement and truth to people facing life’s challenges all around the world. In less than a year, Mandisa performed her three hit singles “Overcomer,” “Good Morning,” and “Stronger” on the highest rated morning show, ABC’s Good Morning America (GMA.) Her performance of “Stronger” welcomed the emotional return of beloved morning host Robin Roberts. The NFL also welcomed Mandisa to perform the national anthem during a Sunday night NFL Network game to kick off Breast Cancer Awareness month where she was joined by members of the 49ers family who are survivors. Her album, Overcomer, released August 27, 2013 and debuted at No. 1 on the Billboard Christian Albums Chart, with the album’s title track holding on to the No. 1 spot for twelve weeks on the National Christian Audience chart as well as the No. 1 position on the Christian/Gospel Core Digital sales chart for several weeks. This year, Mandisa was awarded a GRAMMY for Best Contemporary Christian Music Album for her best-selling and critically acclaimed project Overcomer. Additionally, “Overcomer’s” songwriters (David Garcia, Ben Glover & Christopher Stevens) won the GRAMMY for Best Contemporary Christian Music Song.