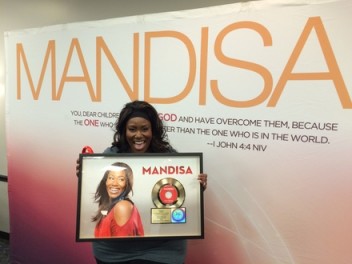 Nashville, Tenn. (October 15, 2014) – On the heels of nabbing her first Dove Award last week for Pop/Contemporary Album of the Year with Overcomer, GRAMMY® winner Mandisa was surprised by her record company, publisher and management backstage at a show last weekend with a plaque commemorating the RIAA Gold Certification of her Digital Single “Good Morning.”
“Good Morning,” which features a rap cameo by tobyMac, has been performed on ABC’s Good Morning America and used in promos by the No. 1 morning show as well as by New York City’s local ABC affiliate, WABC. The infectious song has been adopted by various morning radio programs as their theme song all across the country as well.
Showcasing a new remixed version of “Good Morning” is Mandisa’s newly released, first full-length remix album, Get Up: The Remixes. Featuring 11 remixes of her biggest hits, the project follows the success of her critically acclaimed album Overcomer.
Mandisa is currently on the “Thrive Tour” with Casting Crowns and Sidewalk Prophets. To see if Mandisa is coming to a city near you, visit mandisaofficial.com/home/tour. 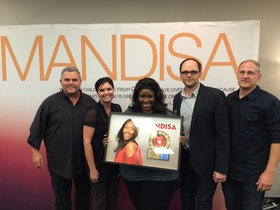 About Mandisa:
With more than 1 million records sold, GRAMMY® Award Winner, Dove Award winner and American Idol Season 5 finalist Mandisa is a voice of encouragement and truth to people facing life’s challenges all around the world. In less than a year, Mandisa performed her three hit singles “Overcomer,” “Good Morning,” and “Stronger” on the highest rated morning show, ABC’s Good Morning America (GMA.) Her performance of “Stronger” welcomed the emotional return of beloved morning host Robin Roberts. The NFL recently welcomed Mandisa to perform the national anthem during a Sunday night NFL Network game to kick off Breast Cancer Awareness month, where she was joined by cancer survivors within the San Francisco ‘49ers family. Her album, Overcomer, released in 2013 and debuted at No. 1 on the Billboard Christian Albums Chart, with the album’s title track holding on to the No. 1 spot for 12 weeks on the National Christian Audience chart as well as the No. 1 position on the Christian/Gospel Core Digital sales chart for several weeks. In 2014 alone, Mandisa has picked up her first GRAMMY® Award, Dove Award and K-LOVE Fan Award. Mandisa was awarded a GRAMMY® for Best Contemporary Christian Music Album and a Dove Award for Pop/Contemporary Album of the Year for Overcomer. Additionally, Mandisa was awarded Song of the Year (“Overcomer”) and Female Artist of the Year at the 2014 K-LOVE Fan Awards. Her first full-length remix album, Get Up: The Remixes, is available now.