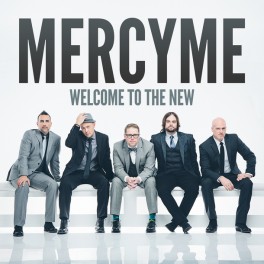 The energetic Welcome To the New released earlier this year and landed at No. 4 on the Billboard 200, the highest new debut of the week. The album received rave reviews, gathering affirmation from USA Today, Rhapsody and more. The popularity of the lead single “Shake” led to a performance on NBC’s TODAY Show and over 2 million music video views on several social platforms.

MercyMe received their first GRAMMY® nomination in 2007 for Best Contemporary Pop/Gospel Album of the Year – Coming Up to Breathe. They were also nominated as songwriters in 2009 for “You Reign” off of All That is Within Me. Lead singer Bart Millard was nominated in 2009 for Best Southern, Country, Or Bluegrass Gospel Album for his solo album Hymned Again.

The dual GRAMMY® nominations make for an epic end to a spectacular year for MercyMe. Following the band’s Top 5 Billboard 200 debut, their classic and career defining hit “I Can Only Imagine” hit over two million digital downloads, making history as the first Christian single to go RIAA Certified Double Platinum. Previously, the song was also the first to hit the one million mark. In addition, their new single “Greater” has spent 12 weeks at No. 1 on the Billboard National Christian Audience Chart, Bart Millard recently hosted the GMA Dove Awards with Lecrae and the band is set to headline the popular Rock and Worship Roadshow Tour in 2015.

About MercyMe:
Since their debut in 2001, GRAMMY®-nominated, American Music Award and multiple Dove Award winners MercyMe have sold more than 6.5 million units in CD and DVD sales, garnered 26 No. 1 multi-format Christian radio singles and four consecutive mainstream radio hits with “I Can Only Imagine,” (No. 4 AC/Top 25 on Top 40/Hot AC), “Here With Me” (No. 4 AC), “Homesick” (Top 10 AC), and “So Long Self.” In 2009, Billboard named MercyMe’s “Word Of God Speak” the No. 1 Song of The Decade and the group the No. 1 Christian Songs Artist of the Decade, with an additional No. 1 as the Christian AC Song Artist of The Decade as one of the industry’s most notable talents. MercyMe made history as “I Can Only Imagine” surpassed 2 million digital downloads, making it the first song in Christian music to go platinum and double-platinum in the digital domain. MercyMe has sold out venues across the nation, including Radio City Music Hall, and has appeared on The Today Show, The Tonight Show with Jay Leno, CNN, Fox New Channel’s Fox & Friends, ABC News, CBS This Morning and in the pages of Entertainment Weekly, The New York Times, USA Today, Billboard and more. Their eighth studio album, Welcome To The New, is available now.