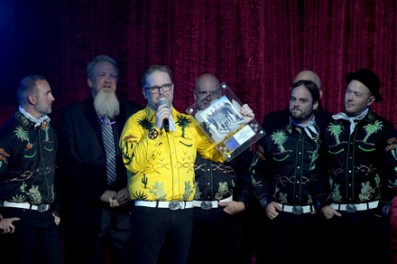 Nashville, Tenn. (October 8, 2014) -MercyMe lead-singer Bart Millard co-hosted the 45th Annual GMA Dove Awards with Lecrae last night, and even so, had no idea what was in store following the band’s lively performance of their No. 1 radio single “Greater.” As the multi-platinum, award-winning band wrapped, the band’s manager, Scott Brickell and Fair Trade Service’s President Jeff Moseley presented MercyMe with a plaque commemorating 2 million downloads of their worldwide hit “I Can Only Imagine,” followed by a standing ovation from the audience. “I Can Only Imagine” is the first single in the Christian genre to receive RIAA Double-Platinum Certification and also made history as the first to go Platinum. The GMA Dove Awards drew a record attendance at Lipscomb University’s Allen Arena, and the entire show will be broadcast exclusively on Trinity Broadcasting Network (TBN) on Sunday, October 12.

In addition to MercyMe taking home a win for Short Form Video of the Year with “Shake,” Millard shared his excitement about hosting the awards: “The entire night was really pretty awesome! I didn’t see the 2 million download thing coming at all. It was pretty surreal to be onstage with Lecrae as well – just unbelievable really, and overall a great night – I had a blast!”

About MercyMe:
Since their debut in 2001, GRAMMY®-nominated, American Music Award and multiple Dove Award winners MercyMe have sold more than 6.5 million units in CD and DVD sales, garnered 26 No. 1 multi-format Christian radio singles and four consecutive mainstream radio hits with “I Can Only Imagine,” (No. 4 AC/Top 25 on Top 40/Hot AC), “Here With Me” (No. 4 AC), “Homesick” (Top 10 AC), and “So Long Self.” In 2009, Billboard named MercyMe’s “Word Of God Speak” the No. 1 Song of The Decade and the group the No. 1 Christian Songs Artist of the Decade, with an additional No. 1 as the Christian AC Song Artist of The Decade as one of the industry’s most notable talents. MercyMe made history as “I Can Only Imagine” surpassed 1 million digital downloads, making it the first song in Christian music to go platinum in the digital domain, and has now reached 2 million downloads. MercyMe has sold out venues across the nation, including Radio City Music Hall, and has appeared on The Today Show, The Tonight Show with Jay Leno, CNN, Fox New Channel’s Fox & Friends, ABC News, CBS This Morning and in the pages of Entertainment Weekly, The New York Times, USA Today, Billboard and more. Their eighth studio album, Welcome To The New, is available now.