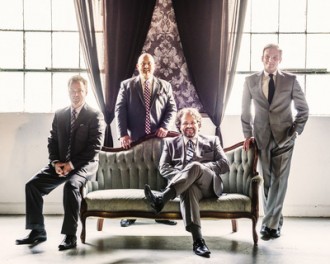 Gospel Greats radio host, Paul Heil, interviewed the group and featured many new songs from their brand new album entitled TODAY. Heil included the title cut of the new album, “Today,” written by the album’s producer Donna King. He went on to feature several more, including a song that is being noted as a potential classic in the Southern Gospel music genre, “Trade This Valley For A Mountain.” That song was written by award-winning songwriter, Wayne Haun, along with the talented Lyn Rowell.

The debut single from the record, “I Wanna Hear The Gospel,” written by outstanding writers, Lee Black and Gina Boe, arrived at Christian radio nationwide about 3 weeks ago and it’s taking off with record speed.

Brad Strider of Mercy’s Well expresses, “We couldn’t be more thrilled with what God is doing in our ministry and through this new music. This album has been a long time in the making. We hadn’t released a mainline project in several years. With that, we really took our time and put a lot of prayer into the decisions on each and every song. While we love to have chart-topping songs, like “More Like Jesus, Less Like Me,” from our last album, our focus remains on what these songs do to minister to the hearts of people who hear them, either in person or on awesome radio shows like the Gospel Greats.”

The new album is available digitally on iTunes and other digital download sites. It is also available for purchase on Mercy’s Well’s website, mercyswell.com, or, at Springside.com. NOTE: In celebration of the recent featured artist show, you can order the album on Springside at 20% off for a limited time.

To learn more about the Gospel Greats or to find a station near you that carries the program, visit their website, www.thegospelgreats.com. You can also hear the show every week on Sirius/Xm’s Enlighten.