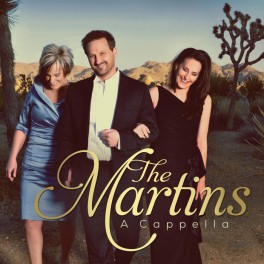 NASHVILLE, Tenn.-June 5th, 2014 – Popular GRAMMY®-nominated and eight-time GMA DOVE Award-winning recording artists The Martins are celebrating their all-NEW release, A Cappella which debuted at #2 on the Southern Gospel chart this week and landed at #17 on the Contemporary Christian Music chart according to Nielsen Soundscan.
It has been nearly two decades since The Martins released their first a cappella CD; and as the multi-talented group celebrates the release of their latest A Cappella recording, which has received glowing reviews, the family sat down with radio host Daniel Britt to discuss the new endeavor. The Martins will be featured on the next two broadcasts of SirusXM’s “Daniel Britt & Friends” during the weeks of June 16th and June 23rd. These broadcasts will feature an intimate interview with Joyce, Jonathan and Judy, who talk about the making of the recording, allowing listeners the opportunity to catch up on the latest happenings with The Martins.
The one-hour program will air three different times over the next two weeks on SiriusXM Radio. The trio will be featured at 7pm (eastern) on Monday, June 16th & 23rd, as well as at 10pm (eastern) on Thursday, June 19th & 26th, and at 12 noon (eastern) on Saturday, June 21st and June 28th.
A Cappella, from Gaither Music Group, has been much anticipated from these siblings recognized throughout Christian music for their intense family harmonies and a cappella masterpieces.  Distributed by Capitol Christian Distribution, the release is available now at retail and digital outlets worldwide including iTunes, Amazon and www.gaither.com andwww.martinsline.com.
Tune into “Daniel Britt & Friends” during the weeks of June 16th & 23rd to hear the very latest from The Martins.
Connect with The Martins at www.martinsonline.com; visit them at facebook.com/martinsonline; or follow them on Twitter: @martinsonline.
THE MARTINS, who grew up in Hamburg, AR, began singing when their mother gathered them around the piano in their rural home and taught them to sing a cappella.  With four number one singles and four top ten singles in multiple Christian music formats and eight GMA DOVE Awards, the trio of siblings has come a long way from that family living room having made appearances at The White House, “The Grand Ole Opry,” the Ryman Auditorium, Dollywood, “The 700 Club,” TBN, the National Religious Broadcasters Convention, the Southern Baptist Convention and the National Quartet Convention.  They are seen regularly on the Gaither HOMECOMING concerts and video series and have toured alongside some of Christian music’s most respected artists.
Tweet