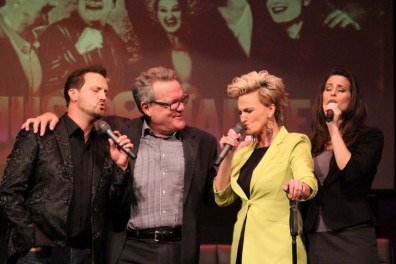 On July 31, 2014, a great group of folks of all ages came out to experience the Music & Madness Tour with Mark Lowry, Stan Whitmire, The Martins, and Jason Crabb. It was a night of laughter, tears and great music- certainly a night to remember!

Stan Whitmire kicked off the evening with a piano solo followed by the Martins “Down By The Riverside” medley and then Mark Lowry sang “Jesus Laughing.” When the song was over Mark said, “I get to be Bill Gaither on this program,” and from that point on, he was on a roll and the program was in high gear. 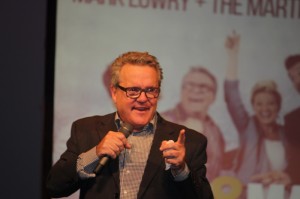 The Martins shared the story of how they met Mark and how the meeting led to an audition for Gloria Gaither in a vacant ladies restroom, of all places, singing “He Leadeth Me.” That encounter afforded them a spot in the Gaither’s heart and as well as the Homecoming stage. As a video played of the Martins’ debut Gaither performance, they took over on stage at the key change finishing out the stunning acapella arrangement as the video faded. 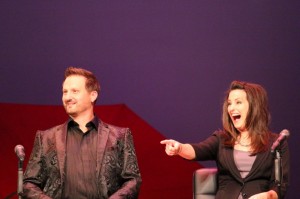 There were several “oldies” moments during the evening, but the crowd-pleaser was “What A Lovely Name.” People liked verse one’s trio of Whitmire, Johnathan Martin and Lowry, but the crowd went wild when Joyce Martin Sanders popped in as “Vestal.” When Joyce opted out, Judy Martin Hess seized the role and owned it! By the way- Judy scored while sporting heels higher than the notes she belted. You guessed it. Her snazzy shoes became good material for Lowry later on!

The moment finally came many had been waiting for. Jason Crabb walked in, the Tivoli lit up. Flashing that boyish grin while downplaying Mark’s comments about his obvious good looks, Crabb 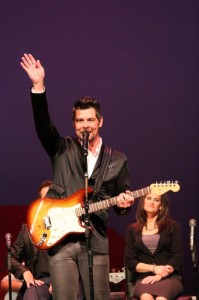 emptied his heart with “I’d Rather Have Jesus.” Jason kicked it up a notch with a hymn medley bringing everyone to their feet. After creating a cozy moment for couples singing “You Are So Beautiful,” Jason brought down the house with “Love Is Stronger.”

During the second half of the program, the Martins killed it on the sassy “Love Is Gonna Ride This Train” while beach balls bounced around the theater. “What am I supposed to do after that?” Jason asked. “Drive your train up here and sing,” Lowry answered. With that, Jason delivered a heated “Through The Fire.” The crowd sang along with lifted hands.

Lowry followed by singing “What Can Wash Away My Sin,” then gestured the crowd to sing the answer. He joked about how people know the hymns; “You don’t have to stand up or put the words on a wall!” He then asked the audience to call out a few, then led them as a mass choir singing “Blessed Assurance,” “Amazing Grace,” “Victory In Jesus,” and “How Great Thou Art.” Most people stood with hands lifted and many cried. Jason flowed with the gentleness in the atmosphere and sang “Sometimes I Cry.” Voices were heard all over the theater singing along. 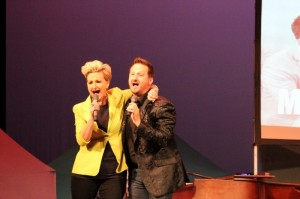 “Let’s be honest,” Joyce interjected when Jason was done, “Life is tough and the quicker we admit that and start encouraging one another, the better off we’re going to be. Life is hard, but God is good! There is no shame in crying alone or in front of people. Our tears are precious to Him.”

Joyce continued, “If you had any idea of all the trouble and all the heartache- the recent trouble and heartache represented on this stage tonight, you wouldn’t have bought a ticket. But, it is our joy and privilege to stand here in the middle of trouble and proclaim that He is exactly who He says He is.” She started singing “Except For Grace” and as she sang, she stooped down to the audience’s level allowing the song’s powerful message to reach its target- the hearts!

Lowry sealed the moment with honesty and humor by pointing out that everyone there as well as everyone in the Bible, with the exception of Jesus, is or was a “freak.” The humorous word choice 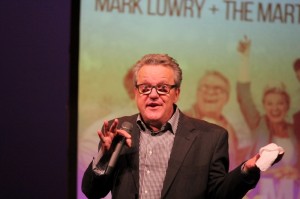 was a perfect set-up for the truth he shared next. “We’re just a pack of freaks, just like you,” Lowry stated. “We’re just beggars trying to tell everybody where the food is. The food is Jesus, not us. The only difference between you and us is- we’ve got the microphones!” He went on to explain, “Be thankful for your brokenness. Broken pots spill more water. People that show their scars are a lot easier to trust than those who show their trophies.”

Lowry then turned the attention to “Mary Did You Know.” He explained his love for questions, and how on that day if he could talk to Mary, he would have a lot of them. “I had a lot of questions, but only the ones that rhymed made the song,” he laughed. Lowry sang it as enthusiastically as if he had just written it. The crowd stood to their feet, applauded and then the 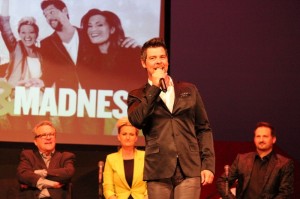 concert was over. Over, but never to be forgotten!

The Music and Madness Fall tour kicked off in Chattanooga and will reach selected cities over the next few months. Visit marklowry.com for more information.