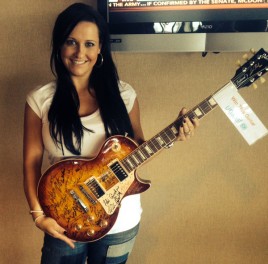 Christian music’s Natasha Owens recently lent her signature to an all-star guitar that will be given away via raffle for the UNICEF Charity Organization.

The fundraiser is being coordinated by Kitty Hardesty and Terrell Lee as part of the American Airlines Admirals Club “Champions for Children” for UNICEF’s “Change for Good” fundraising program. This year Gibson Guitar Company took notice of the efforts and supplied a Beautiful 120 Anniversary Edition Les Paul Guitar.

Terrell Lee comments, “As American Airlines Admirals Club “Champion for Children” representatives, we have a guitar autographed by various national artists that pass through our club and it is displayed in our Admirals Club. During this fundraising program, donated items are raffled off and used as tools to raise funds, awareness and support for the neediest children of the world and UNICEF. Pocket change and cash donations are collected at each Admirals Club for a raffle ticket and a chance to win that guitar and the other donated gifts. The guitar and other items will be raffled off at our Admirals Club around Christmas this year. All proceeds go to the US Fund for UNICEF. We are so indebted to Natasha Owens and all the celebrities for participating in this cause.”